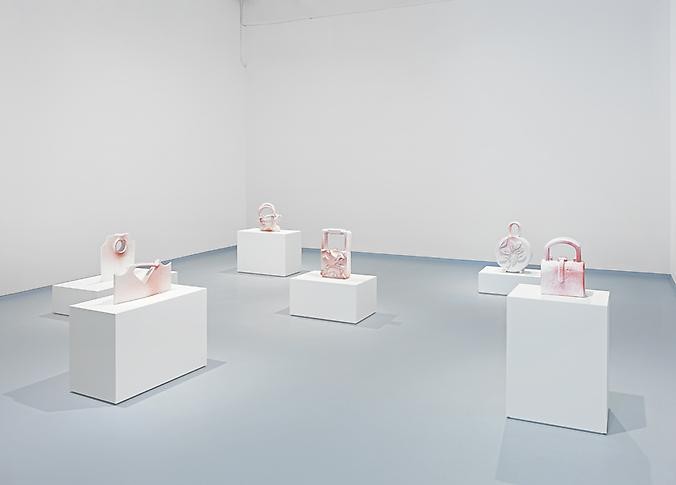 Presented atop plinths suggestive of store product displays, the handbags represent Slominski’s work at its most charmingly wry within a body of work renowned for its ironic complexity. The simple directness of the handbags is a shared awareness of art’s pretentions, that include the lofty history of carved marble sculpture, the presentation in a gallery setting and on bases that attest to specialness, not to mention, the omnipresent use of polystyrene to protect fine art and other objects of value. The handbags employ Slominski’s familiar reference to the simple forms of practical folk craft and related decorative embellishments, an aspect which in other of his work that can touch on the sinister, as in his animal traps.

Slominski first used the material in his “polystyrene pictures,” large framed wall reliefs shown at Metro Pictures in 2006, and elsewhere in the following years. He later cut and painted joke-like sexually explicit images and words into small polystyrene sheets, followed by carved decorative forms such as flowers and universally familiar products like collared shirts and flip-flops which were included in his 2012 exhibition at Metro Pictures.

Andreas Slominski lives in the town of Werder near to Berlin. In 2013 he received the Hannah Höch Prize from the City of Berlin with a subsequent exhibition at the Neuer Berlin Kunstverein. He has a one-person exhibition currently on view at Kunsthalle Bremen. Other one-person exhibitions include Museum für Moderne Kunst, Frankfurt; Serpentine Gallery, London; Fondazione Prada, Milan; Museum Boijmans van Beuningin, Rotterdam; Deutsche Guggenheim Berlin; and Kunsthalle Zürich. His work has been included in group shows at Museum Ludwig, Cologne; Witte de With Center for Contemporary Art, Rotterdam. He participated in the 2003, 1997 and 1988 Venice Biennales.
www.metropicturesgallery.com