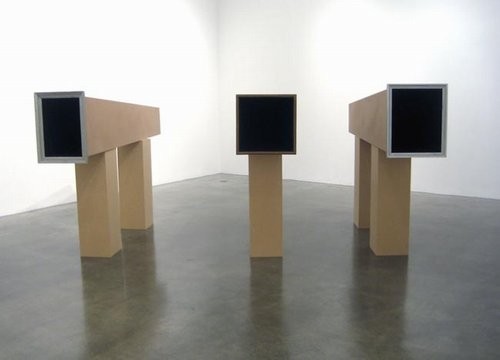 For his season opening exhibition at Metro Pictures, the Berlin-based artist Andy Hope 1930 presents ON TIME, an exhibition of painting and three-dimensional forms that channel the evidence of art as a ghostly manifestation in a paranormal time and space.

Central to the exhibition are the Time Tubes that are seen as minimal sculptures, two boxes that support a tapered horizontal box with one open end. A picture frame is mounted on one end of the tube, suggesting that this is where one looks. Peering through the frame into the infinite blackness is the experience of both seeing what is physically present yet encountering unidentifiable space, like an extension of Malevich's black squares.

The artist's austere and beautifully surfaced paintings in subtly different shaped white frames are based on imagery from his 2008 Phantom Gallery exhibitions in Los Angeles and Zürich. These shows presented empty rooms with visible evidence of vanished paintings and objects on the walls and floors. Painted in creams and beiges these paintings reflect the ghostly walls of the installations. Two of the paintings are in shades of gray in response to black and white photographs of the Phantom Galleries, investing the suggested source objects with yet another layer of removal from their original existence as actual paintings as part of real life.

The third room presents Nova Nomad, a three-dimensional work that includes a painting and foreshortened stairs encircled by a picture frame; and a Star Trek multi-level chess board. Hope is exploring in these ghostly and mystical representations his more romantic relationship to art and it's mysterious powers, while continuing to draw upon science fiction, comic book heroes, and other cultural clutter.