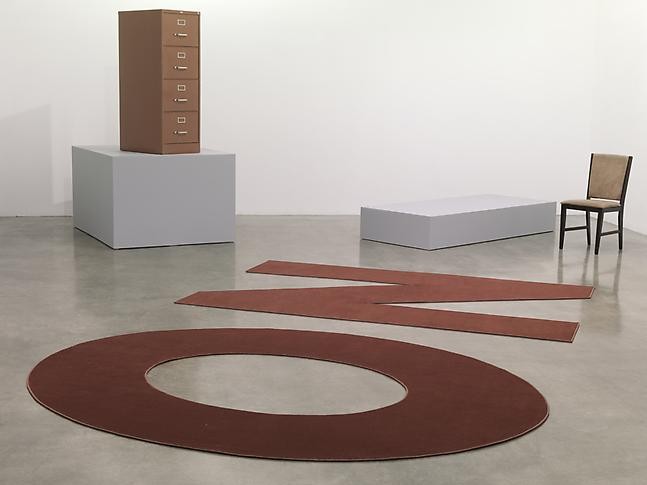 John Miller elaborates on many of the tropes he has masterfully cultivated throughout his thirty-plus year career in “Suburban Past Time,” his latest exhibition at Metro Pictures. Through artificial rocks and plants ranging in scale from massive to ordinary, wallpaper, store-bought and handmade decorative elements, Miller transforms the gallery into a bizarre yet familiar public space. The works included in the exhibition are a continuation of the artist’s ongoing sociological investigation into so-called middlebrow culture, which focus on artifice in Western consumer societies. To evoke a sense of the generic, Miller pastes two vector print wallpapers depicting exterior views of nondescript plattenbauten, or apartment blocks, in Berlin and a beach resort on the working class tourist island of Mallorca, Spain. With the wallpapers are two carpets spelling “NO,” filing cabinets painted in what Miller describes as “hot rod finish,” and an oversized tree and rock that refer to the practice of using fake “natural” objects to hide pool pumps in suburban backyards. Intermittently present amidst the installation are two people who either sit on a chair reading or rest on a plinth. Also on view are a series of flash animations Miller created with long time collaborator Takuji Kogo under the name Robot. Lifting the text from personal ads and setting them to MIDI voice recordings, cultural hierarchies related to age and wealth emerge from the borrowed lyrics of these videos projected on the gallery’s walls. John Miller is the recipient of the 2011 Wolfgang Hahn Prize, which was followed by a related exhibition at Museum Ludwig, Cologne. Miller had a substantial retrospective at Kunsthalle Zürich in 2009 that was accompanied by a catalogue published by JRP. He has had other one-person shows at: Musée d’art moderne et contemporain, Geneva (2004); Magasin-Centre National D'Art Contemporain, Grenoble, France (1999); and Kunstverein Hamburg (1999). Miller has participated in major group exhibitions at CAPC Musée D’Art Contemporain, Bordeaux (2010/11); Museo Nacional Centro de Arte Reina Sofía, Madrid (2010); and MoMA PS1, New York (2006). His work was included in the 1991 Whitney Biennial in New York and the 2010 Gwangju Biennale in South Korea.
www.metropicturesgallery.com