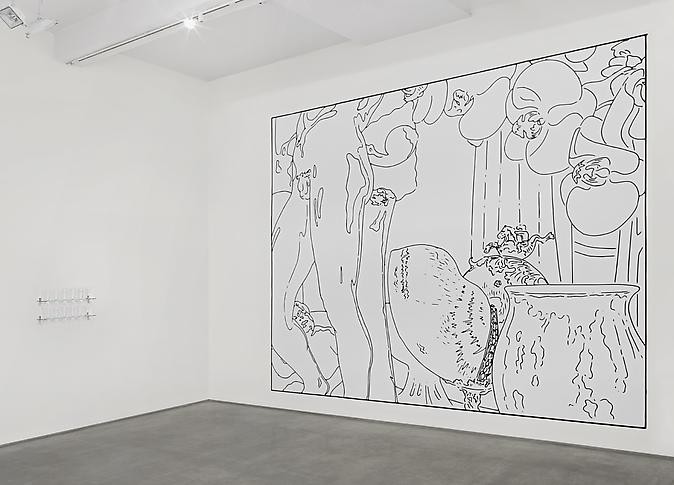 In her exhibition “No Drones” at Metro Pictures, Louise Lawler exhibits black-and-white images that are traced from her iconic photographs, printed on vinyl and mounted directly on the wall. Lawler uses her photographs of artworks in museums, private collections, auction houses and storage to continue her complex and ever-evolving consideration of art and objects in their working contexts. Photographs such as Chandelier, a picture of an ornate chandelier at a collector’s home overshadowing Fontana’s Concetto Spaziale in the background, and Hand on Her Back, a plaster cast of a crouching Aphrodite photographed at the New York Academy of Fine Arts, are transformed into reductive outline drawings.

The “tracings” were first shown in her 2013 survey exhibition titled “Adjusted” at the Ludwig Museum, Cologne. Discussing Lawler’s well-known work Salon Hodler and the picture’s various re-presentations the museum’s director Philipp Kaiser writes in the exhibition catalogue, “Salon Hodler, a color photograph taken in the noble home of a collector in Geneva, exists in a variety of [other] formats, as a black-and-white matted print, as a paperweight, a projection in public space, as well as a tracing. [...] Whereas the black-and-white version appears as a document of the original work, in the best spirit of structuralism, the traced and enlarged version represents the skeleton of the picture. Having mnemonically lodged in our mind and imagination, the picture resonates merely as its own ghost. [The tracings] demonstrate empirically the further steps that can still be taken to explore the extreme ends and corners of pictures and their contexts.”

To produce the traced works Lawler worked with children’s book author, illustrator and artist Jon Buller.
In addition to Philipp Kaiser’s essay, the “Adjusted” catalogue includes texts by Benjamin H.D. Buchloh, Hal Foster and Sven Lütticken. It is available at the gallery.