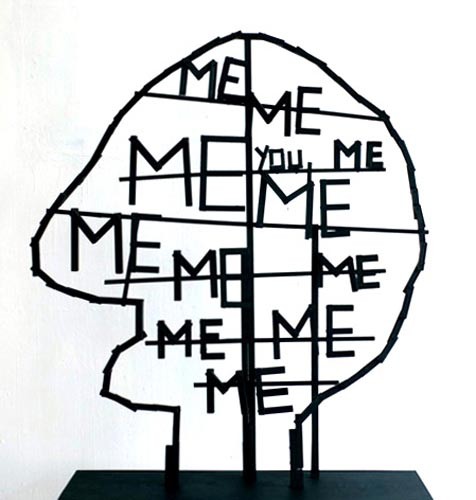 The wall drawings and wood sculptures that make up the core of Olaf Breuning's exhibition are based on the content and imagery of his small, childlike pencil drawings that "speak about the simple questions one could have about life." These drawings are typically produced in concentrated episodes of self-imposed isolation; prior to this exhibition Breuning spent five days alone drawing in his room aboard the Queen Mary II. In their translation to a larger scale, Breuning's humorous and earnest philosophical aphorisms are presented with a directness that is poignantly faithful to their source drawings. The wall drawings use broad black lines painted directly on the white walls. Their sculptural counterparts are essentially three-dimensional drawings made of wooden blocks painted black such as "Me, Me, Me, You and Me," which depicts a human head in profile with each egocentric thought illustrated inside: a dozen "me's" and a single "you." In "Yesnoyesno," the viewer is literally confronted with a wall of indecision.

In contrast to the existential, stark, black and white works, the third gallery is devoted to "color studies," a series of works based on paint and primary colors. Breuning's play with dripping, splattering and spraying paint is documented in these sculptures and photographs. Experiments that began as diversions in the studio evolved into Breuning's active engagement with painting and abstract art—issues he never before considered.

Olaf Breuning was born in Switzerland and lives and works in New York City. www.olafbreuning.com