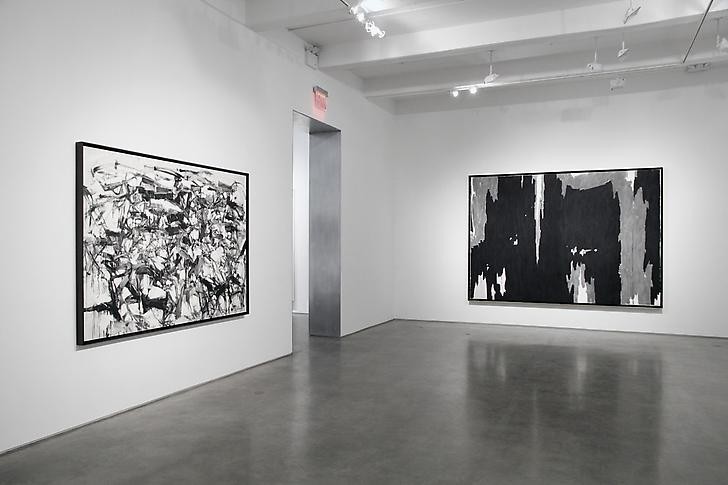 "Gang of Cosmos," an exhibition by Robert Longo at Metro Pictures, includes twelve charcoal drawings of well-known Abstract Expressionist paintings. In entering into this dialogue with major figures of 50 years ago, Longo acknowledges Abstract Expressionism’s undiminished importance in American art and its influence on his own thinking. This thoroughly studied and finely executed body of work represents Longo's most personal engagement with his subject and the revelatory process of executing the drawings in minute detail.

Longo studied the actual paintings in museum collections and worked from photographs that he digitally manipulated to take on the challenge of drawing a painting, representing the overall picture and translating the three-dimensional detail of the physical paint and the color into black-and-white. Rendered in charcoal, the original artworks are immediately recognizable, but it is the overlooked or imperceptible details of the complex surface, the tactility of the paint, the brushstrokes, and the pattern of the canvas that Longo has made visible. Exploring his own ambivalence toward painting, Longo's drawings address the historical magnitude of Abstract Expressionism in art historical and cultural contexts—the shift in political and cultural dominance from Europe to the United States in the years following the Second World War—as well as the fundamental differences between the execution and behavior of painting and Longo’s own intensive and acutely rendered drawings. Represented are Willem de Kooning, Helen Frankenthaler, Lee Krasner, Norman Lewis, Joan Mitchell, Robert Motherwell, Barnett Newman, Jackson Pollock, Ad Reinhardt, Mark Rothko and Clyfford Still.

A concurrent exhibition, “Strike the Sun,” by Robert Longo at Petzel Gallery looks at the U.S. Capitol building and the American flag, two highly polarizing national symbols that stand in counterpoint to new aggression of the Abstract Expressionist paintings and their exploitation for international propaganda. In Longo's enormous seven-panel drawing, the immutable monumentality of the Capitol image is particularized by subtle variations in the molding above each of the building’s windows and by their individual curtains. Longo’s most recent confrontation with the contentious nature of the American flag as symbol of both nationalism and protest is a 17-foot high black wax surfaced sculpture that appears to collapse into or fall through the gallery’s floor. A mediating note is a drawing of the poignantly solemn image of the riderless horse that led JFK’s funeral procession.

For more than 30 years Longo has been a prominent figure in New York's cultural scene. His artworks, performance pieces, music performances, films and videos invent, cull, and recycle iconographic images from an expansive cultural visual cache to comment on ideas surrounding image potency, production and circulation. He was among the five artists included in the seminal 1977 Artists Space exhibition “Pictures” and is a key figure of the subsequently named Pictures Generation. In May Longo will be honored by The Kitchen. Longo has had one-person exhibitions at the Musée d‘art moderne et d‘art contemporain, Nice; Krefelder Kunstmuseum, Krefeld, Germany; the Albertina, Vienna; Isetan Museum of Art, Tokyo; the Deichtorhallen, Hamburg; Los Angeles County Museum of Art; Museum of Contemporary Art Chicago and the Menil Collection in Houston. Robert Longo has participated in Documenta, the Whitney Biennial and the Venice Biennale.
www.metropicturesgallery.com