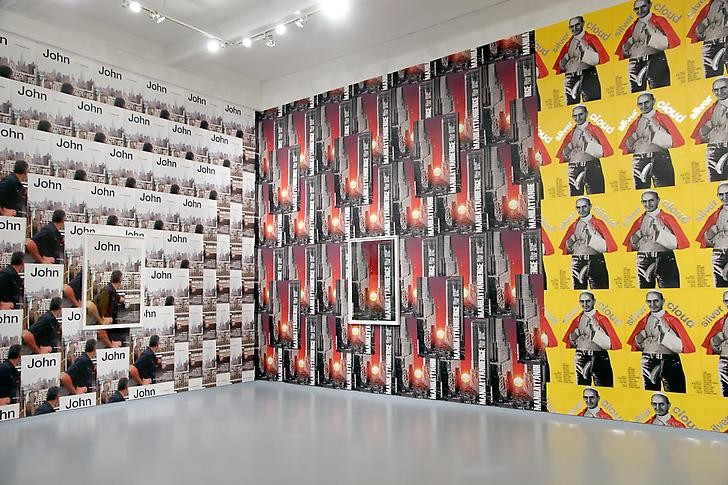 T.J. Wilcox presents six collages for the films in his panoramic film installation “In the Air,” opening at the Whitney Museum on September 19. Wilcox made posters from his unique collages, which he used to cover the gallery’s walls. The collages hang over the posters that are installed in a manner that recalls the wheat-pasted posters that blanket exterior walls around New York City. The films were shot from Wilcox’s studio on Union Square with spectacular 360-degree views of Manhattan and tell New York-specific stories that are represented in the collages and posters in the exhibition. Futura shows the Empire State Building with a zeppelin moored to the skyscraper’s pinnacle; Precious Mettle pictures artist, starlet and heiress Gloria Vanderbilt against a kaleidoscopic quilt print; an image of Pope Paul VI, whose motorcade Andy Warhol released Mylar balloons onto from the roof of the Factory in 1963, is combined with elements from Warhol’s album covers for the Rolling Stones’ “Sticky Fingers” and the Velvet Underground & Nico’s self-titled album in Silver Cloud; On the Horizon incorporates Polaroids of young men photographed by the legendary fashion illustrator Antonio Lopez; the super of Wilcox’s studio building stands on the roof looking downtown as construction of One World Trade Center is underway in John: and in Manhattanhenge the sun sets with perfect precision between the canyon-like walls of the city’s grid.

A catalogue for “In the Air” will be published by Hatje Cantz and is scheduled for release in December. T.J. Wilcox has had one-person exhibitions at the Stedelijk Museum, Amsterdam; Kunstverein München, Munich; Kunsthaus Glarus, Switzerland; and the ICA London. His work has been in group shows at institutions such as the Museum of Modern Art, New York; Haus der Kunst, Munich; GAM Galleria d’arte Moderna, Turin; Museo Reina Sofia, Madrid; Ludwig Museum, Cologne; Kunsthalle Wien, Vienna; Migros Museum, Zurich; the Walker Art Center, Minneapolis; and PS1, New York.
www.metropicturesgallery.com