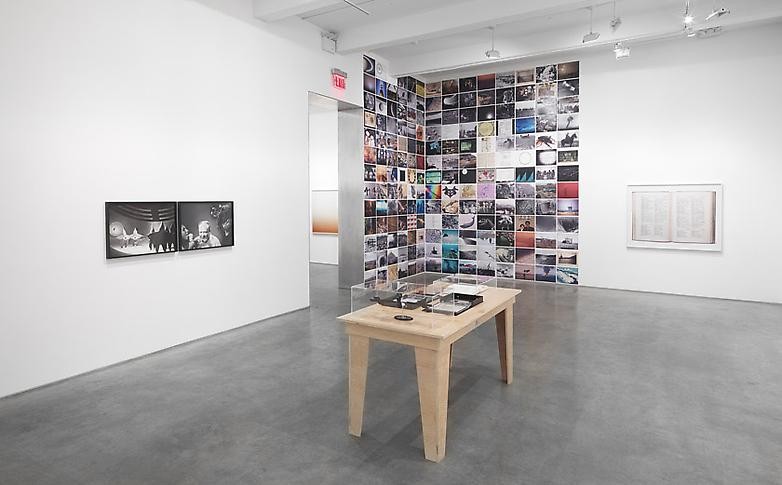 In his first exhibition at Metro Pictures, Trevor Paglen presents works related to his project The Last Pictures, a selection of photographs reflecting unease and uncertainty about the present, and a deep anxiety about the future. Commissioned by Creative Time, Paglen worked with scientists at the Massachusetts Institute of Technology to produce a disc micro-etched with 100 photographs, designed to last in space for billions of years. The project culminated in November of 2012 when the disc was attached to a communications satellite and launched from Kazakhstan into Earth’s orbit.The exhibition includes a selection of key images from The Last Pictures. Among the large color prints and black-and-white diptychs is Angelus Novus (2012), a photograph of the backside of Paul Klee’s 1920 painting of the same name. Once owned by Walter Benjamin, the painting is an important reference in the philosopher’s last work “Theses on the Philosophy of History” (1940). In the essay Benjamin argues for a circular conception of history, one recognizing that despite the notion of progress, societies produce and reproduce similar economic, humanitarian, and political crises. For Benjamin, the “angel of history” faces the past and is propelled backwards into the future by the ongoing explosions of the present. By presenting the back of the painting, Paglen asks his audience to look back at the ongoing crisis of the present. Additionally, there is a grid of 182 images collected for the project but ultimately excluded and a video of the satellite in orbit. Also exhibited are photographs, "skyscapes," of nearly undetectable surveillance drones in a seemingly empty field, a massive National Security Agency data center under construction in suburban Utah, and secret satellites in the night’s sky. Paglen’s images are both documents of clandestine military operations and a contribution to the history of photographic abstraction, following in the tradition of Alfred Stieglitz’s landmark “Equivalents” series of imposing clouds in an inordinately black sky. In September 2012 Paglen and filmmaker Werner Herzog discussed The Last Pictures in an event at New York’s Bryant Park. Following a series of lectures at institutions in the United States and Europe in fall 2012, The Last Pictures was published by the University of California Press and Creative Time Books and is available at the gallery. Paglen will give tours of the exhibition every Saturday at 3 PM except for February 23rd. Trevor Paglen holds an MFA from the School of the Art Institute of Chicago and a Ph.D. in Geography from U.C. Berkeley. Paglen has had one-person exhibitions at: the Vienna Secession, Berkeley Art Museum; Kunsthall Oslo; Kunsthalle Giessen, Germany. His work has been included in group shows at: MIT List Visual Arts Center, Cambridge, MA; SITE Santa Fe, New Mexico; Haus der Kunst, Munich; Walker Art Center, Minneapolis; Tate Modern, London and San Francisco Museum of Modern Art. He has participated in the 2009 Istanbul Biennial and 2012 Liverpool Biennial.
www.metropicturesgallery.com