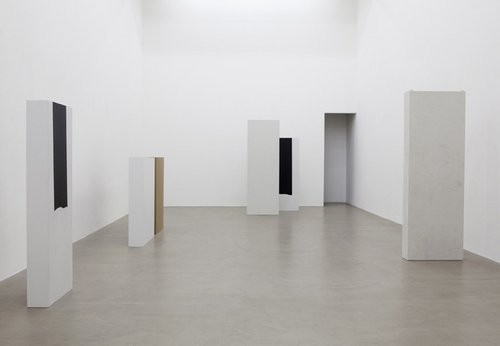 For this exhibition Anita Leisz has continued to build upon a series of works which investigate the construction of basic forms using readily available industrial grade material. For the past several years Leisz has worked towards producing simultaneously reductive and expressive forms which through their extreme simplicity accentuate details that offer the viewer an opportunity to see the works as both general and specific.

Two seperate methods of construction are employed in the exhibition one requires a wooden skeleton upon which Leisz affixes fiberboard the other is made of white pressboard. While in the past all seams, joints, or breaks in the material were practical necessities dependant on the construction of the interior skeleton these new series of works exaggerate their construction turning the signs of their stability into cartoons. Simple white pressboard structures are now emblazoned with oversized black tape. The same white pressboard then reverses its role and becomes the interior skeleton upon which a fragile material such as cardboard is given stability. In a concrete sense the works are made up of the minute details created by chance and repetition which give a sidewalk its patina or a sofa the particular contours of its owner. The failure of a metaphorical language to descibe the works of Anita Leisz are helpful in understanding the basic idea that the works are generated by an obsessive atmosphere of precision which find their correspondance in the general confusion and frailty of the human body and in the specific power we give the objects we create and employ for our bodies and the language which our bodies utter to explain the need for those objects.

In an allegorical sense the exhibition could seem to be organized into singles, couples and families, some of whom have divorced, remarried and forged bonds based on new found similarities. Or in a seperate example we may have four children who have left home to create their own lives but who are never-the-less related to one another regardless of their distances.

But the exhibition is not really a family therapy clinic.
(Will Benedict)
www.meyerkainer.com