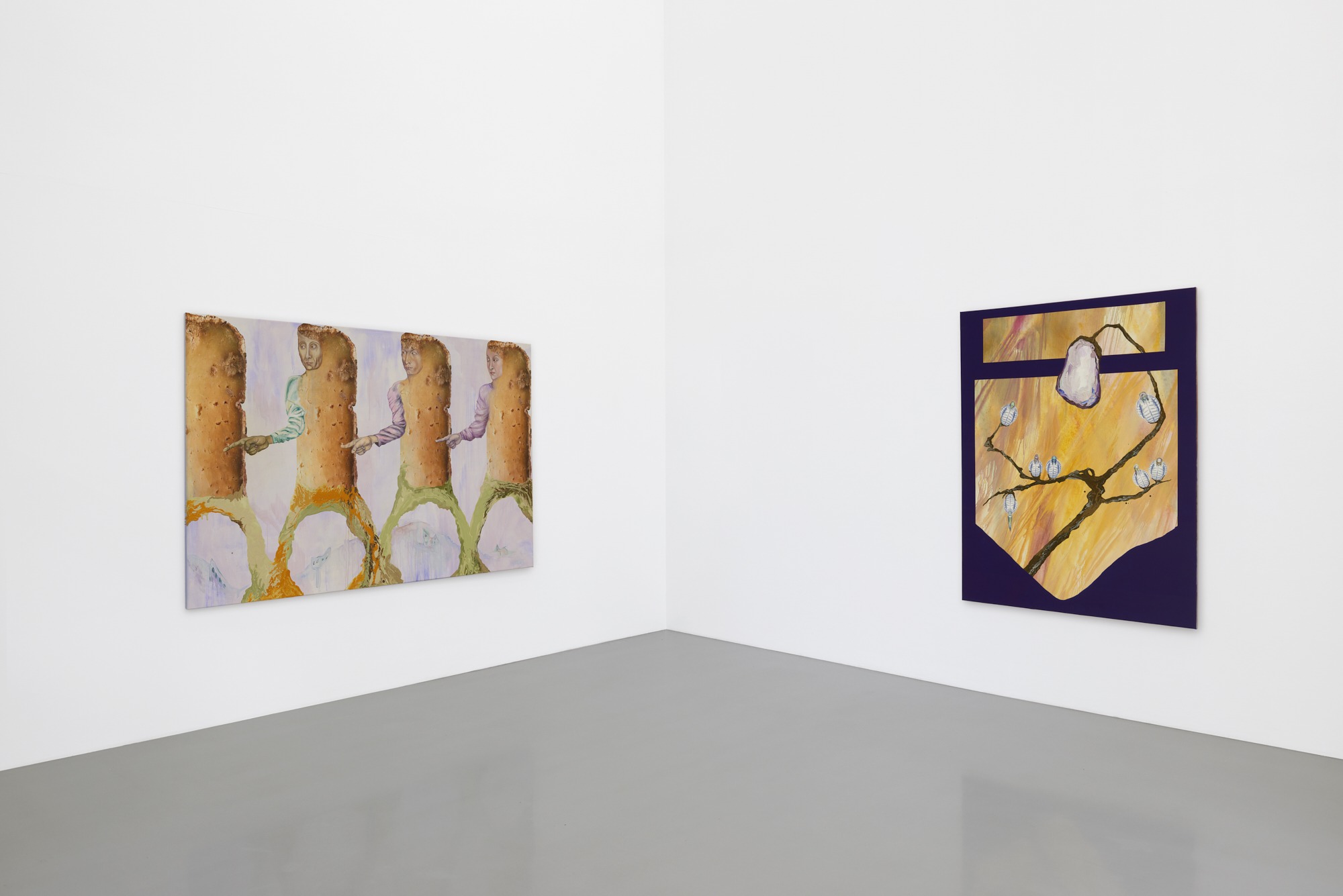 There is something fragmentary about the figures depicted in this exhibition. They appear to be composed of parts, they seem disjointed, and they recur. Fragmentation can describe a dissociation of identity, the disintegration of otherwise coherent parts—yet this continual division equally seems to hold the pictures in Der Spaß an der Arbeit together.

Identity, decay, and repetition are aspects one might search out here:

The heads of the dismembered bodies are copies of copies, taken from the work of so-called old masters as well as from a painting by the artist herself. Made last year, the painting (Die Schwestern Fleiß) struck her as more popular than other pieces from the same exhibition. The question of what makes a painting successful, as well as the peculiar situation of trying to repeat oneself, became central considerations in the remaking of this piece.

For Mehr Fleiß, Mehr Schwestern, the faces from the original painting were photographed, aged using FaceApp, and screen-printed at the edge of the picture. Instead of down coats, the new sisters in the center of the picture now wear practical smocks, are younger, and perhaps a bit more industrious than their meanwhile aged sisters. The inserted wall forces a physical confrontation with the painting, which at first brings the structure of the surface to the fore. From further away, however, it is rather the social structure that becomes visible, its generations arrayed like the layers of an onion.

Another prototype is the Viennese version of Judith with the Head of the Holofernes by Lukas Cranach the Elder. This popular motif inspired numerous painters to create multiple versions—Lukas Cranach alone painted four different variations of Judith. The figures resemble each other to the degree that perhaps sisters might, yet they never look the same. Once again, this raises the key question of why this particular subject gained such popularity, whether—as often suggested—it is the story of the heroine that has made it a symbol of victory against tyranny, or whether it is simply the subject itself, the beautiful, very elegantly dressed woman holding a head in her hands.

AS had a similar, imitated experience in repainting the heroine in Judith at the Window. The figure has once again been aged by means of FaceApp, though instead of a knife she holds two saws, and—as far as we can see—it is not Holofernes who is being cut up, but seemingly the figure itself, possibly the entire exhibition.

Other Judiths—screen-printed and not aged this time—are waiting in the cellar of Idole im Keller. While the delicate strokes in the background are only visible at close range, from a distance some may see the lopped off heads as the teeth of a gaping maw, the windows as eyes and nostrils.

In Die Rote Hose, we find further adaptations of the original sisters now stuffed into jumpsuits. They come across as insecure and dissatisfied. The figure on the left—a kind of alter ego—is eyeing a pair of red pants in a shop window. Is this perhaps a flirt with the possibility of a different identity?

Perhaps. Perhaps the screen-printed work clothes are meant to express a negotiation of identity and individuality; perhaps the subject is the industriousness we may associate with them—or the misperception we may be laboring under. Perhaps the aging of old masters, the technology that offers such an appealing glance of the future, taken together with the blending of classical and self-referential signifiers, are intended to blur the temporal reference; perhaps the intention is to leverage the roles of fan and role model. Perhaps the looping repetitions, the references within and without the works, the recurrence of motifs and techniques, the communication between the images as figures point at, observe, mirror and repeat one another, are meant to hold us spellbound, to take us by the hand. And perhaps it is simply the pleasure in the work.