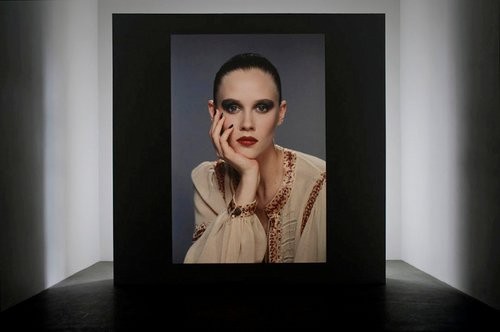 It's not nostalgia for the past, but for the eternal present which lies on the other side of the past. (Pierre Schneider, US Vogue, September 1976)

For his contribution to "curated by_vienna 2010", Mathias Poledna has invited Los Angeles–based artist Karthik Pandian to collaborate on an installation at Galerie Meyer Kainer. Drawing on their shared background in moving image the artists have created a new work, entitled 1991, that occupies the main space of the gallery, engaging histories of exhibition design, portraiture and commercial image production.

1991 is an installation of a suite of 24 slide images projected at a large scale over a period of several weeks with only a single image presented each day. For this work the artists have produced a 35mm motion picture with a run–time of one second. Shot in a studio in Los Angeles, a 35mm VistaVision camera rotated at an angle of 90° was used to create a high–resolution, vertical format image. Each frame of this film was subsequently isolated and hand–mounted to 35mm slide. The installation is framed by twin free-standing walls bookending the main gallery and functioning as projection booth and screen, respectively.

The suite of images could be described as a portrait of a young woman (South Africa–born contemporary runway model Marike Le Roux) confronting the viewer directly in a fashion reminiscent of a screen test or a magazine cover image. The model is wearing a peasant–style blouse from Yves–Saint Laurent's acclaimed and highly–influential 1976 Spring/Summer Opera-Ballet Russes collection. Over the course of the exhibition, the images remain close to identical from day to day with only minor differences indicating their singularity – the glimmer of a sequin, the shift in the model's posture, the blink of an eye (images # 5–7), or the hint of a smile emerging towards the end of the sequence.

This work marks the first collaboration between the two artists who represent successive generations of image producers who work primarily in film. Mathias Poledna's most recent solo exhibition was on view at Portikus, Frankfurt in early 2010. Karthik Pandian will show for the first time in Europe in the context of this exhibition; a solo presentation of his work will be on view at Midway Contemporary, Minneapolis in the fall of 2010.

The presentation of 1991 in the main exhibition space is complemented by an installation of Abstract Painting, 1952, a work on canvas by Ad Reinhardt (1913–1967) in the entrance room of the gallery.
www.meyerkainer.com