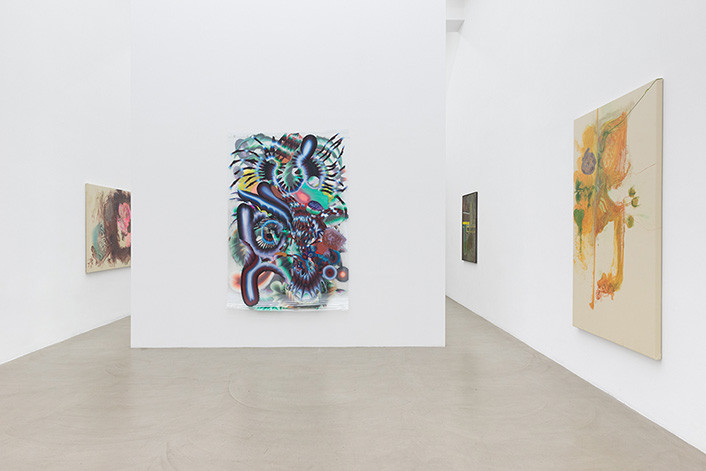 At the end of the eighties, a group of artist-friends began questioning the localization of art. Did the basis of art lie in the personality of the artist, or in the bohemian society around them, in the theoretical concept, or even in the artistic object itself? To friends Günther Förg, Martin Kippenberger, Albert Oehlen, and Heimo Zobernig it became clear that in the future, concept and context would acquire a previously unknown significance. "In the future we will no longer make, only think" (Kippenberger).

Yet these artists continued to place a certain faithfulness at the forefront of their practice, and so remained bound to the classical medium of painting. A decisive aspect of their discourse was the 1831 novel The Unknown Masterpiece by Honoré de Balzac.

In this well-known novel, an academic artist, a young genius, and a skeptical old master of painting search for the truth of art. It is about the great painters' struggle for their own expression, as the young Nicolas Poussin, through the salon painter Porbus, meets the cranky old master Frenhofer, who has brooded for ages in his hermitage over a portrait of the legendary courtesan Catherine Lescaut. Poussin "lends" Frenhofer his beloved Gillette in order that Frenhofer might finish the painting. But when the master finally presents his legendary work, Poussin and Porbus see "nothing but colors concentrated in wild confusion and held together by an abundance of bizarre lines." A mess. Only in one corner of the painting do they discover the tip of a bare foot, white and pure, "like the torso of some Venus" - a lonely fragment, the physical remains of an artistic odyssey. As in all parts of Balzac's Human Comedy, the characters in The Unknown Masterpiece are less individuals than types representing a social role or an art-theoretical position.

As Georges Didi-Huberman shows in The Embodied Painting, 2002, the story remains of continuing importance for the profession of the painting. Not only because Frenhofer, the painter invented by Balzac, practically characterizes the entire history of modernity, but because The Unknown Masterpiece persistently points out the fact that the ultimate reason for painting lies beyond the practice of painting itself. In this sense, the further course of the story represents a continual postponement of this ultimate reason, in so far as to how it should be realized. The protagonists seek the perfection of painting as an act of deciding. This process of bringing about an artistic decision amounts in essence to the constitution of the painter as subject. As long as the subject remains divided (Frenhofer’s critical-theoretical skepticism), the act of bringing about the heroic pictorial decision - the decisive brush stroke - will elude him.

But the story also addresses the relativization of representation, the mimetic. Above all, however, it speaks to the imperative of the in-between, the suspension of the figurative problem of the enveloping surface - the incarnate. The meshwork of physical surface and depth, the dialectic between appearance and disappearance, front and back, which are justified in the active, oscillating coloration itself. The painting would therefore already exist in the interplay of surface and depth alone. It is a hyperphysics of layers and vibrations. The physical appearance, but also the thoughts, act through this. The painting (canvas, fabric), therefore, no more represents a surface than do the color, the skin, or the "foliate" principle of the visible, which Balzac suggests here. Painting either mocks us, in light of a surface that is not a surface, or we kill it. Some of this is reflected in Frenhofer's dilemma itself: between ontological mockery and self-sacrifice.
www.meyerkainer.com