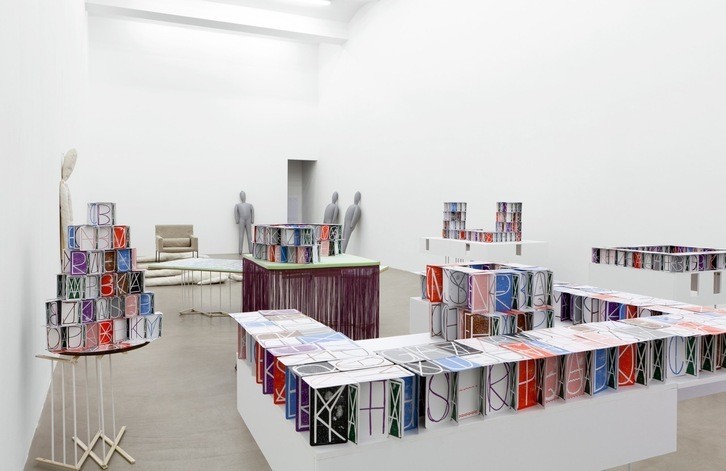 In their collaboration, which started in 2008, Arakawa and Gambaroff have been working periodically on different instantiations of the Two-Alphabet Monograms. Set up as a dysfunctional written and spoken language in 2009 the project stays in constant flux and found different formal and material existences in performances, sounds, installations, objects, architecture, and speech-lessons.

"One will pat the 25 randomly drawn cards on four different parts of one's body: Head, Heart, Gut, and Below. The result is your Two-Alphabet Monogram self-portrait, that is Bodycard Testimonial. With this testimonial being voiced out in different abstract modes, one can consult the cards of and on your past, present and future: any questions and concerns. Two-Alphabet Monograms are tools to ST IR UP AN IN TE RS UB JE CT IV EP OE TR YO CE AN."

At Galerie Meyer Kainer, Two-Alphabet Monograms are arranged like dwellings of poets, or quasi MVRDV buildings. Surrounding those sets of buildings are inflatable men, us the viewers, the men with holes (i.e. on Gut), and bodycardmen interrogating our hearts. A different version, the Two-Alphabet Monograms flags, is currently exhibited at "Ecstatic Alphabets/Heaps of Language" at the Museum of Modern Art, New York.

Although Arakawa is working always in performance, Gambaroff on the other hand mainly within painting, both share a common interest in the interrogation of language, its social, psychological, and formal structures. Their project for Galerie Meyer Kainer was developed from this perspective and is comprised of new works by the artists.