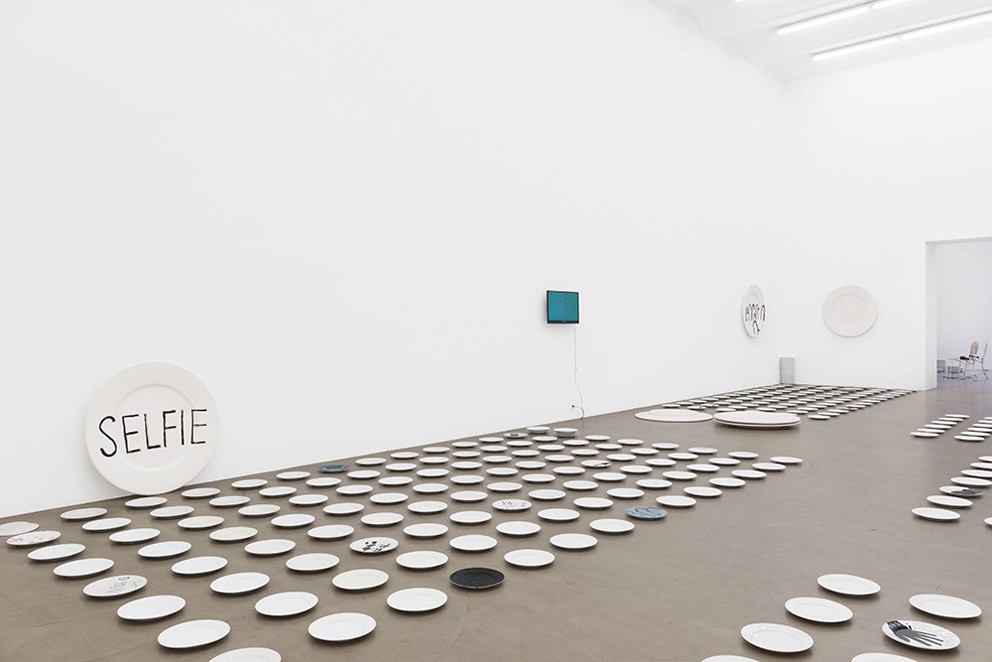 The movie begins and the actors are waiting for food. The table and its younger siblings – the plates – form their stage and aspire to become actors themselves.

Galerie Meyer Kainer is pleased to present an exhibition of new work by Ei Arakawa and Nikolas Gambaroff. This is the artists’ second show together at the gallery.

Arakawa and Gambaroff travelled through Armenia earlier this year. The trip was originally set up as a heritage visit for Gambaroff’s mother who, born to an Armenian father, had never been to the country. The exhibition is speculative in nature; instead of documenting the trip, the artists interviewed the participants on their return to the U.S., asking them to recollect memories, to analyze the group dynamics of the trip and the psychological shifts in their perceptions.

The artists fictionalized these recollections in a film, Plates of Getashen, turning this approximation of a collective memory into a mini drama. Shooting the drama in three versions, with three sets of actors, presented each actor with an unlikely precedent, as each was mostly experienced in mainstream US television roles. The actors were presented with abstract psychological profiles of the characters, giving each one a superabundance of information with which to interpret the characters and allowing for a huge number of potential relationships and slippages between the actors, the characters, and the people they play.

Asked about the movies, the artists elaborated: “Like the guests at a dinner table, the three sets of characters and the three movies in their entirety produce a mental space – their geometric relationships to each other form an imaginary circular space in the void surrounded by all the elements – like a tabletop, or rather the surface of a plate, a topography to be filled with all the potential it has seen in its days – if you think about it – a blank plate can be any type of personality, could assume any type of psychological space.”

These dramatized versions of a collective memory is an attempt to imagine Armenia as a place and an socio-emotional space, as seen through the fragmented eyes of a group that – in its inter-subjective, inter-gender, inter-racial and inter-generational form – tries to re-imagine how memories can produce fiction and how those fictions become new possibilities for identification.
www.meyerkainer.com