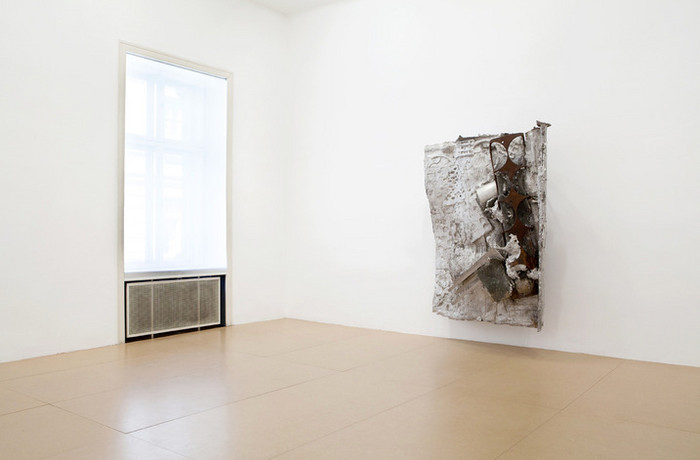 The Emerging Artist Series
by Will Benedict

Frank Stella is one of the 20th Century's most technologically innovative and productive artists. The recipient of many honors and awards, Frank Stella is the only living painter to be honored with two retrospective painting exhibitions at the Museum of Modern Art. In 2010 he received the National Medal of Arts from President Barack Obama at the White House.

The most obvious and startling aspect of Stella's 50–year career has been his ability to reinvent himself and his art. Since 1960, when he completed his renowned series of "Black" paintings he has continually attempted to redefined the concerns of painting and extend its boundaries. His early emphatically flat black paintings sought to excise illusionist space from the picture and to establish the painting as an object, but with the Irregular Polygons of 1966–67, Stella's attention shifted, and he began to explore the illusionist potential of abstraction; by 1973, with the completion of his Polish Village pictures (taking titles and shapes from the wooden synagogues destroyed by the Nazis) Stella seemed to have abandoned the anti–illusionist flat surfaces of his earlier paintings and moved toward a projective, enveloping three–dimensional pictorial space based on loaded historical conditions, exotic locations and spacey sci–fi effects. For the 1974–75 "Brazilian" series, he painted on etched metallic sheets formed into fan–like shapes; with the 1977–78 "Exotic Birds", he combined honeycomb aluminum with expressionistically worked ground glass surfaces. In the 1980's series "Circuits, Shards, South African Mines, Malta and Cones and Pillars" the paintings grew even denser, with overlapping, cut–out patterns that twisted into sinuous curves as the pictures moved forward into high relief. From 1998 until 2002 Stella worked on a series based on the 19th Century writer Heinrich von Kleist which attempts to meld Kleist's Metaphysical notion of developing one's mind in infinity while never reaching any absolute condition. Inversely his recent work, the painted sand cast pieces of the Near East Series invoke a object from outer space set on a collision course with current limits of technological innovation. Frank Stella has managed to be both an artist very much of his time while at the same time very much on the outside of contemporary art discourses. This can be attributed to a rather unfashionable reliance in his works on new technologies for manipulating material which in retrospect allow us a view into the most current techniques being utilized in engineering, architecture and industrial design and can be viewed as a small museum of the limits of those developments.
www.meyerkainer.com