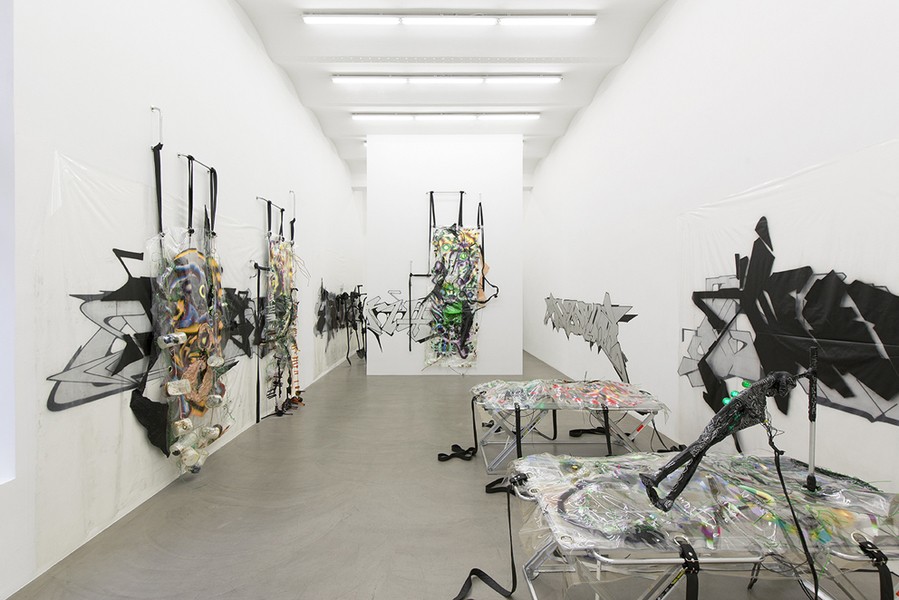 He did not know anymore how long he had wandered the city. Endless periods of time seemed to have passed since he had set out on his quest. He could no longer say with certainty how long he had been on his way – time, it seemed, played no role in his mind now. Was it hours, days, weeks, even months or had he been on his search since the very beginning of his existence?
It was almost impossible for him to summon up clear memories of the beginning of his quest. He had long been aware of the fact that he was searching for something – a part of his identity.
Ever since his earliest childhood days, it had always felt this way, it was as if he had been locked out of an area in his mind and feelings which was now out of reach and inaccessible.

He prowled the shady, bleak streets of this morbid city, its memory, and the abyss of its decline and decadence.
With its classical architecture from times of past grandeur, monuments to heroic deeds of old, odor of great history, and a touch of illumination... that ostensive order and righteousness, those achievements of a culture continually losing its way and disintegrating, one that was only cultivated for its own sake and to increase the population.
In the past he had, at times, still enjoyed the colorful hustle and bustle on squares filled with the imagery and sounds of modern industrial society, the distractions of dark backstreets and yards where money could buy just about any hedonistic desire. Now, he had only contempt for all of this. Contempt for all these sensory impressions, temptations and feelings that lured him away from his quest, that wanted to hold him captive in the unbearable pettiness of his existence.
He had to flee the city and its residents. Both were utterly lost in endlessly repetitive trivia. He wanted to leave behind him the sardonically grinning grimaces of people and buildings, this masquerade of life that really wasn't one at all.
Morbidly obsessive, he kept on wandering feverishly down main and side roads, roaming around parks and stumbling through an endless sprawl of housing developments.

When he found it, he was hardly more than a shadow.
The place looked to him as if it had always been there, as if it existed outside of any perception of time and space. A temple of infinite wisdom, filled with ancient, forgotten knowledge and hidden secrets.
It spread out before him like a wound in the continuum of the known universe, like a rift in the reality known to him.
Well aware that his ceaseless quest was now drawing to a close, he stood at the threshold and felt a sense of absolute triumph.
The first thing he became aware of was a sound wafting towards him from out of the twilight, an incessant throbbing, hammering, and seething that seemed to come from far far away. He had to wait a long time for his eyes to adjust to the twilight, and could make out the first shadowy outlines. It appeared this space was filled with life, with a scarcely fathomable dynamics of millennia-old congealment and constant movement, and as he was trying to grasp something tangible, an air of the sacred flowed around him like an ethereal mist rising from an opened pharaoh's burial chamber.
He felt dizzy.
He hesitated – knowing immediately that every step...

And then he crossed the threshold.

He entered the room like an acolyte of long forgotten cults, slowly, keenly aware of the movements of his muscles, in the manner of a prelude to a ritual that...

The space
Elongated, sacred
Step over the threshold

Like Charon's journey across the Styx into realms of isolation that spanned eons, he left the world of the mundane, pushing onward into the sphere outside of direct perception, exploring mysteries that most people would forever be unable to uncover.
He was welcomed by machine-like silhouettes of an incomprehensible mechanics of permanent breathing cycles, a mesh of unreal colors, incomprehensible lines, cylinders, pendulums, tubes and bionic incubus apparatuses.
He immersed himself in a pulsating life of recurrent circulation.
Everything was filled with vapors of decay and cadaverous motion, which swung back and forth like a sword of Damocles in a hypnotic pendulum movement.
Infinitely slow, like a marionette he felt his way forward, not of his own accord, but going along, as it were, with the primal force of the pulsating cosmos that manifested itself around him.
It was as if he were part of an endless machine that was invariably drawing vital energy, deadening it, and delivering new life, filling all his senses, aligning his movements with the marching step of a shadowy procession that was accompanied by humming priests with strangely shaped tiaras on their heads. In the course of his initiation, they would introduce him to long forgotten mysteries and terrifying truths, willing to convey to him an understanding of wisdom as yet incomprehensible and intangible to him.
Universes of colors and shapes opened up around him, rushing towards him, burning themselves into his mind, and fully engulfing it.
With every step he felt his own existence dissolve, his sleep of death end. He knew that each step meant the passing of his old, petty life.
While around him priests mumbled a beguiling sing-song chant, shadowy beings mysteriously whirred around his head, hovered above and watched him furtively, he could make out in the twilight reliefs on the walls – the signs of an older, greater but infinitely alien wisdom that seemed impossible for him to decipher. Without being able to fully grasp them, he instinctively sensed that these signs, like the writing on the wall, heralded with fanfares the downfall of all traditional order and knowledge, screaming out into the cosmos the end of all culture known to him.
Soon he could no longer distinguish between himself and the outside, the bubbling and seething around him, he could feel how every further step meant a kind of dissolution. While unreal faces stared at him, tubes reached for him like tentacles, alien colors and signs flowed through him, permeating every last cell in his body, and shadowy priests tugged at him, the whole room seemed to wheel around him.
He was a machine, became part of a grand symphony of atomic chaos. Becoming initiated and, at once, victim, ghoulishly crawling, he moved closer to the center of the sanctuary while with every further step the throbbing and pounding grew into a cacophony of madness.

When he stepped into the innermost sanctum, he was no longer in space, no longer part of this world.

Here he found it
That which carried everything in itself
And that he himself was ____
www.meyerkainer.com