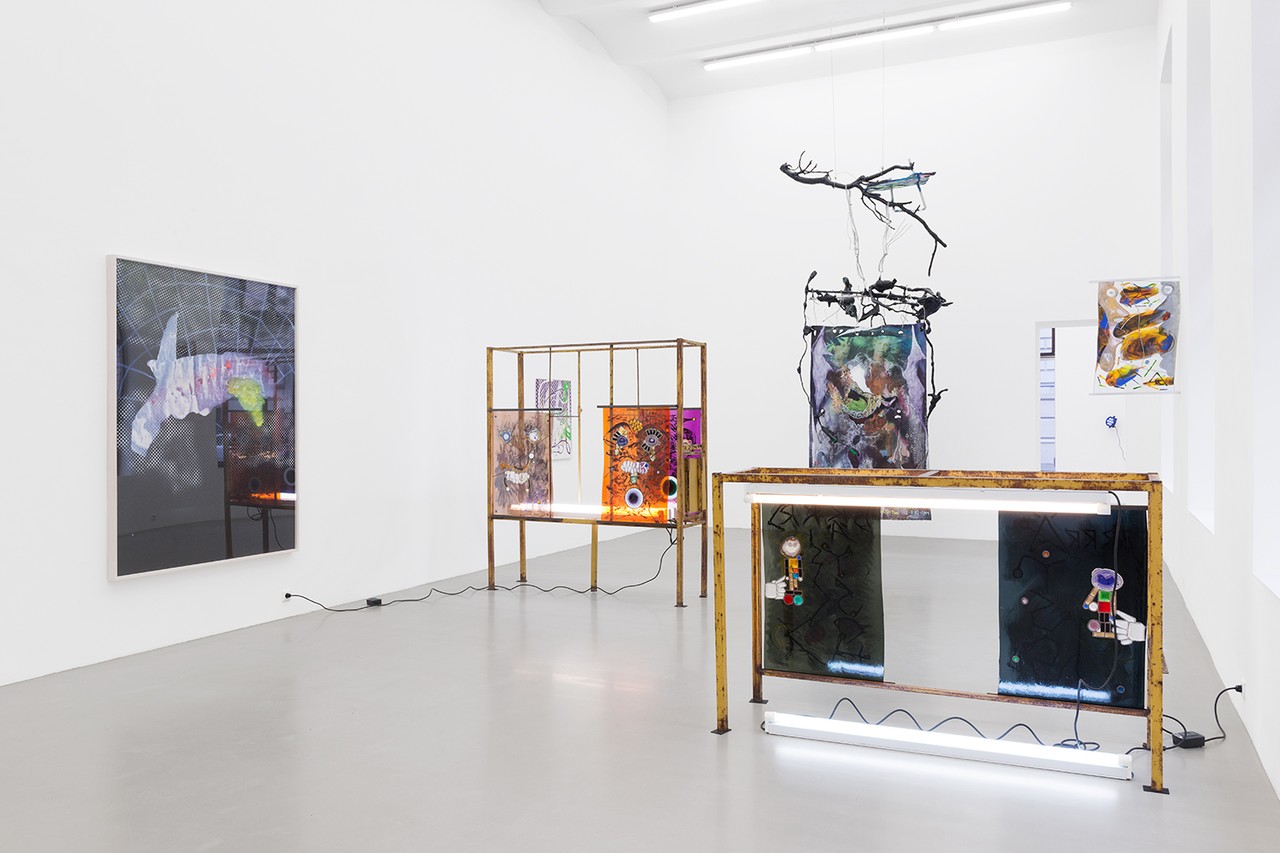 How crazy was Klee when it came to his "Geister Luftzug"? How much irony is behind Tàpies's self-portrait from 1947, which teems with "esoteric" signs and symbols? To what extent did Beuys see himself as a shaman, whose transformational processes he recorded on various sheets from the fifties to seventies?
Sigmar Polke's "Tischrücken (Seance)," Thomas Schütte's "Große Geister (Big Ghosts)," or Christian Jankowski's "Wahrsagerei (Fortune-Telling)" – motifs of the irrational and scenes of the uncanny appear time and again. The exhibition project is brought to life by the ambivalent, the enigmatic, the dubious, the oscillation between "spirit" and "esprit."

The exhibition takes its title, "Lemurenheim", from a collaboration between Franz West (sculpture) and Rudolf Stingel (housing), organized in 2002 by Galerie Meyer Kainer in the forecourt of the Museum der Moderne in Salzburg.

The sculptural head by Franz West stems from a series of bridgeheads created for a bridge in Vienna's Stadtpark, which were not exhibited in the intended location, but instead at Documenta IX. In Roman mythology, lemurs are spirits sprung from water; they are also West's abstract answer to the formal demand of creating figurative sculptures.

Franz West shares with Sigmar Polke an enthusiastic mistrust, braced with irony, of all that is symbolic. Art was always a serious game for Polke, controlled coincidence and the conjuring of sprits: "It's wonderful when something happens that you cannot explain with the normal coordinates," Polke said, referring to spiritualistic sessions where he supposedly received instructions for his work from "higher beings." His paintings, a jumble of color drops and gradients on luminous backgrounds, seem to almost paint themselves.
Ei Arakawa uses his light sculptures, in which music and spoken words play an important role, to evoke an unreal atmosphere. He groups coarsely pixilated LED paintings, based on images by other artists, within the space, choreographing the luminous and sonorous work into an audiovisual chorus of only partially controllable audiovisual interaction. By furnishing his work with performative potential, he creates a space of collective creativity.

KAYA was developed between Kerstin Brätsch and Debo Eilers not as a collaboration but as a brand. At issue is the construction of a transpersonal artistic entity. The body can no longer be perceived as a discrete unit of identity. They prosecute a degradation of anthropocentic Humanism in favour of a view oft a world which defines the contradictions between nature/culture and humanely/non humanely new in creating an idea of a non-hierarchical but equalized relation between the different species. The effect is based on the new convergence of once differentiated branches of technology as nanotechnology, biotechnology, information technology and cognitive science.

Kerstin Brätsch started in 2012, together with the glass painter Urs Rickenbacker, to transform her paintings into glass. In such a way she gave an element what is conceptual attached to the bodily expression a real material body which seems yet to renounce, in his transparency, proper physicalness.

Using machines, red rubber arrows, clay pots with pictures of Mars, and plastic fauna, Katja Novitskova conducts an archeology of the future. "Spirit, Opportunity, and Curiosity" is the title of an exhibition at Kraupa-Tuskany Zeidler. Building bridges between new technologies and behavioral science, her preferred territory is the fantastic, the uncanny, and the dismaying aspects of the imaginary.
www.meyerkainer.com