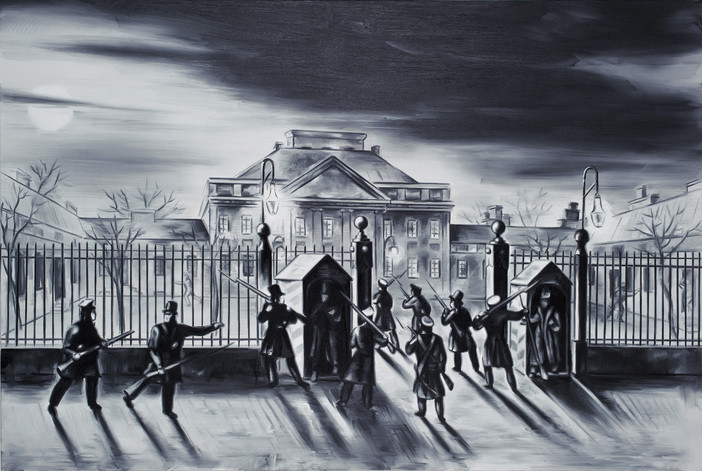 "An artist doesn’t care about politics and social conflicts" is written on a painting of the Polish painter Marcin Maciejowski. However, if one takes a closer look on his subjects, one cannot be so sure anymore how serious he is about that (apart from the fact that the sentence is not his but taken from a text on Picasso). Maybe he is just avoiding a perspective on the role of the artist that is too constricted. The subjects of his paintings are taken directly from life: parties, gallery openings, exhibitions, night life, but also historical situations and public figures, such as the November Uprising of 1830 in the Polish-Russian war as well as the young actress Romy Schneider in a Florentine café. A small painting shows Elly Jones with her daughter Elie, which resulted from a brief relationship with the poet Vladimir Mayakovsky, another a performance by the artist Wlodzimierz Pawlak. "1986 - 1974 = 12" is written on the painting and this is also the title, which conjuncts Maciejowski’s year of birth with the year of the performance.

He treats his figures with a striking equality. The famous actress in Chanel obtains no more attention than a young student at a bar or the girlfriend of the artist, who looks at the beholder with a thoughtful gaze. For Maciejowski it makes no difference either, whether the short plot takes place in a small or large format. The sources for his paintings come out of his extensive archive that comprises film stills, photos taken by himself or by friends as well as pictures from magazines, history books and from the internet.

Were it not for a few details, such as cell phones, sneakers or cars, you could hardly locate the paintings in a certain time. Also, the color palette is no evidence in this regard, as black and white and an at times melancholic tonality, is not automatically assigned to the past. Marcin Maciejowski decides according to the source image. "Wanda Ryszkowska (Warsaw 1945)," is based on a more recent Polish television series about the Polish resistance, which was shot in color. The paintings indicate a current perspective of Marcin Maciejowski and how he presently considers things that surround and occupy him, as the simultaneity of motives and themes displayed reveal an immediate contemporaneity.

Marcin Maciejowski paints from photos or film stills, which is particularly evident in the image frame and spatial composition. The motifs are selected with a keen sense for the right moment, a moment, which does not correspond to the camera's shutter. Herein lies a significant difference to a documentary photo, which marks the distinction between a view through the lens and a way of seeing, that painting points out. Maciejowski shows, what he wants to see, he captures a moment that is good for a painting. Good in the sense, that a subject is particularly attractive, because it reflects the desire to approach a thing, a person, a feeling by painting, and because it is able to present a particular topic and relates the paintings in the exhibition to each other or to historical paintings.

Thus the girl, who is selling drinks at an opening, slightly brings back to ones mind Manet’s Suzon at the Folies-Bergère, except that the crowd in the Parisian bar have long migrated to other canvases in Maciejewki’s work. There you'll see him with a girl on his lap. "The artist indicates a crucial problem", he adds. Yes, desire is a crucial problem, both in art—Maciejowski free-associates this painting to Rubens "Satyr and Bacchante"—as in life. Therefore it is not only the short sentences that appear in his paintings, but also his way to see and to paint, that comments on the world and the social contexts the artist lives in.