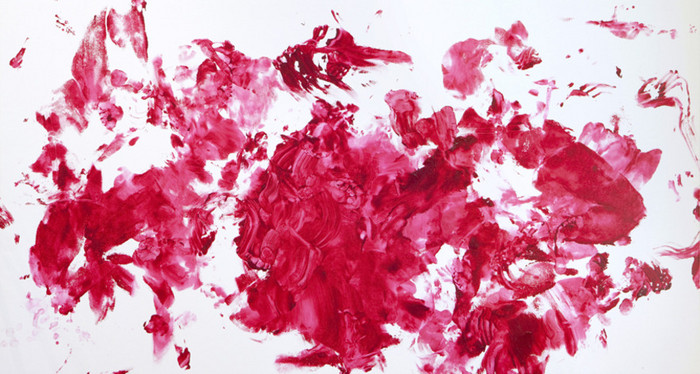 It's less a lack of ideas than a lack of headspace that led Reena Spaulings to revisit the "living paintbrush" paintings of Yves Klein. With Klein, the bodies of nameless female models functioned simultaneously as subjects and as tools of painting. Spaulings' pinceau vivant, Michael Sanchez, is also a critic, a doctoral candidate in art history, an occasional assistant at Reena Spaulings Fine Art, and a friend of the artist. While performing his painterly function here, Sanchez asked Spaulings to help him produce an English translation (forthcoming) of Pierre Klossowski's La Monnaie Vivante, an essay theorizing a voluptuous economy based on the exchange of living bodies.

When the model steps in and out of the painting, we get friendship beside itself, art history beside itself. And when the image organizes a closer than usual proximity to the body it depicts and receives, we get "real abstraction." Real abstraction originates in action, not in the mind. Examples: money, property, painting, the artist... Entering the materiality of production processes, it becomes a reflexive abstraction – both the form and content of the process. Here, the body is, among other things, a kind of painting money addressing the socialized character of abstract knowledge.

The paintings return a certain personalist specificity to Klein's gesture, addressing how abstraction really goes to work today, in our cities and networks. Abstraction is not the final result of a painting, it is the thing and the business of painting from beginning to end, and the painters too.

Michael I, II, III and IV are displayed within an installation of painted steel pipes. Commonly used for plumbing and gas, these pipes were also used for hanging garments in the former dress shop that was the original location of Reena Spaulings Fine Art in New York.
www.meyerkainer.com