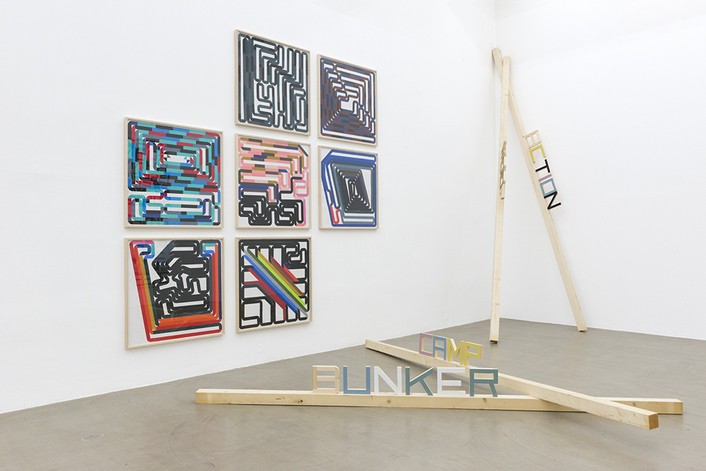 In his current exhibition, Siggi Hofer shows infinite loops (circles), text paintings, and word objects. Points, which are connected to a line, circulate in a closed system in the paintings, which are based on circles. (According to Paul Klee, a line "is a point that has been set in motion [...] even the self is originally a point.") This circuit is sometimes regularly, sometimes trickily elaborated, without any overlapping. Occasionally it even forms figurations, but never a maze. The sequence of the unfinished series is based on dates from 1970 to 1992, which gives it a pseudo-retrospective nature. Thus the series approaches the present and will potentially exceed into the future. The text-related images, which structure the opposite wall, are equally dynamic. Text and image are complementary sign systems that are connected in many respects, and Siggi Hofer applies mutually on each other in his works. While language pointedly sharpens his form in terms of content, the flexibility of the formal relationships emphasizes the openness of linguistic constructions of meaning.

All the works are based on the same design principles, and a simple construction of the forms. The typeface and the resulting lines are developed analogously and directly on the image. Circle and rectangle are drawn with strikingly simple tools, namely a metal rail and a glass. The methodology will always be further refined in the course of the series, generating meaning exactly at those points of deviance. In the text paintings, the presumed grid shifts, animating the whole surface.

Hofer collages and edits textual fragments from different sources such as literature, graffiti, lyrics, and demonstration banners, including the little errors of its originals. The simple texts seem to embrace an entire life, but are almost blatant at the same time. "My brother does not work" or "My Luck is my hand." Then again, there are floating words, exposed and placeless, sometimes perceived as a sound, sometimes as an object. In the exhibition, some of them are actual objects: letters mounted on wooden beams. "Union," "Bunker," "Lab," and "Losch" are just some examples. The beams lie or lean in the space room, like barriers thrown between two facades covered with posters.

The title of the exhibition "Woof" is an exclamation, shortest communication or an onomatopoeic word for the barking of a dog, a child's word, and also the title of a British television series about a boy who turns into a dog. But it is also the name of a Berlin fetish bar: Woof, ("the no.1 place for hairy men"). In all of the works by Siggi Hofer, such polyphony of different realities resonates. Apart from recalling youth cultures, however, the bar or the club is certainly in the foreground, as heterotopic place, which receives its identity due to perpetually renegotiated agreements, and is accordingly in infinite motion.
www.meyerkainer.com