A drawing that illustrates my last show 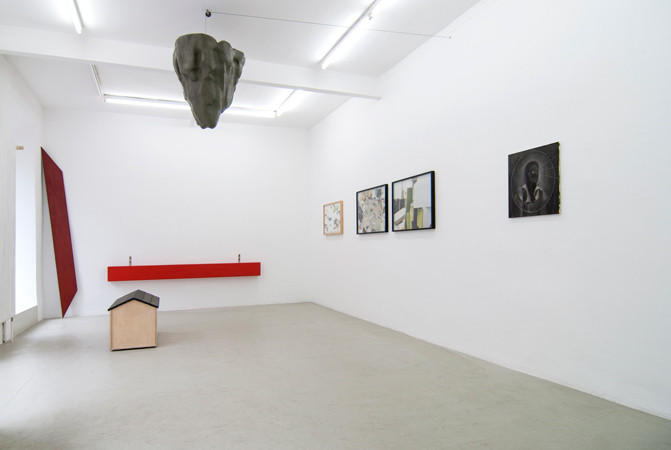 Déjà vu. The sensation of have already experienced a situation that just occurred. Internal visions appear in an instant, but disappear again before we can grasp them more clearly. The mind reaches out for a fragment and holds on to it like a thread that leads back to an apparition just barely remembered, into a labyrinth of internal, revivable, potential images.

The series of drawings "A drawing that illustrates my last show at Meyer Riegger Karlsruhe" by Jonathan Monk appears as a metaphor in the context of this thought. Like Ariadne`s thread, Monk`s line on paper seems to wind through the gallery rooms of Meyer Riegger, tracing the route of an exhibition he realized here in 1999. But the artist does not leave it that; a route that guides one through the premises. Although the path between the entrance and exit is clearly marked, Monk sketches loops and folds, which sometimes expand the path, sometimes abridge it. The route through the exhibition is never rendered directly, even if the line insinuates a continuous progression. Thus, following the thread through the labyrinth does not inevitably mean complying with rectilinearity. The eye darts around, lingering on a moment, a picture, an installation, a sculpture, which may have been set up here by Jonathan Monk in 1999. And the eye can also return, recurrently obtaining a view of a situation in a space, as it was allegorically described, as déjà vu. But this time it is immediate and deliberate, a purposeful reviewing of the previously seen by pausing, looking inward, recurring.

The current exhibition at the gallery Meyer Riegger in Karlsruhe also manifests itself in this manner. Jonathan Monk`s drawing "A drawing that illustrates my last show at Meyer Riegger Karlsruhe" functions as a definitive piece within the exhibition, as the title bespeaks: For all of the artworks on view at Meyer Riegger Karlsruhe have already been shown here once before, namely in exactly the same place where they can now be seen. The exhibition delineates a state of temporal and spatial overlapping. Individual visual moments light up here and there, as does that which is situatively recalled, and it simultaneously conjoins what appears as memory within a new context. Layers of time and space intertwine. Each moment we single out gives us cause for looking back: at the corresponding exhibition visit, at the erstwhile observation of a work, at our own understanding and classification of images within our mental archive, and the fragmentary retrieval of such images from our memory. Like in a crystal, all of the set pieces of viewing itself merge here: From a slightly shifted perspective, viewpoints overlap once more, always leaving space for the whole entity of variation.

Just as Jonathan Monk retraces potential routes through his past exhibition, which expand situatively and individually, repeated viewing is accompanied by the possibility of not necessarily regarding the previously seen as a doubled perception, but as a nuance for a route, from which the next space can occur, reveal itself, and be outlined before the minds eye quite specifically.