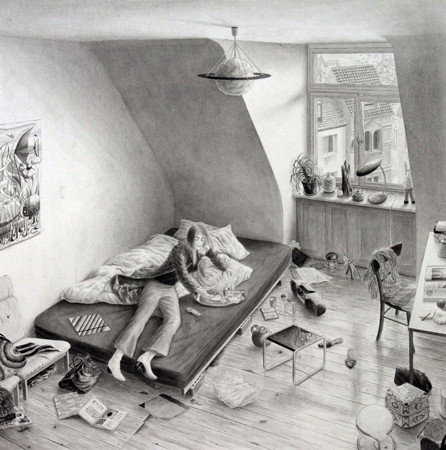 The world is a mirror. And the mirror is an eye, but the eye is a black hole. A drawing by Anna Lea Hucht shows a dark-haired man in a room, which one immediately supposes must be a bed-sit.
The type of furnished lodgings in which the furniture seems left over, left behind and stale. Everything’s all right, the wooden inlays on the furniture could even be valuable – and yet something like unease hangs in the air. Anna Lea Hucht enhances this impression with the color of the floor – a dull, stuffy greyish shade of green that appears to contain the odors of centuries. Within this setting the depicted man stands. His back is turned to the viewer, and he is peering into a mirror so large that it takes both hands to hold. And the mirror peers back at him. It is filled with a gigantic eye, the iris of lucid blue, the pupil black and bottomless.
Interiors constitute an important theme of Anna Lea Hucht’s work. The walls are hung with pictures, posters, wall charts, mirrors and other decor. The shelves contain small figures, vases, shells, plants etc. Hucht’s interiors always form bridges to the exterior world. They are little hermitages, cloistered away from everything happening around them. They resemble a mixture of ordinary living space and laboratory. The accommodations that Anna Lea Hucht portrays in her large-scale drawings seem like carefully observed scientific studies of contemporary scenes: One feels one can recognise the “typical” girl’s room, or the “typical” attic room of an artist. At the same time these sceneries are infused with a subtle tension. Something eerie radiates from them, while the artist does everything to meet and hold exactly that point at which realistic perception and surreal sentience cannot be separated from one another.
Drawing equates a cognitive process to Anna Lea Hucht. Only in this is it possible to adequately reproduce the texture of porcelain, or the structure of braided plant stems, having understood the exceptionality of the materials and their characteristics. Duly, the objects in the still lifes refer beyond themselves: They recall the act of thought that was necessary to invent and create the object, as well as the artist’s analytical faculty that preceded the image.
The interiors have a similar effect. They too are not only descriptions of situations, genre-scenes from contemporary life. In fact, they facilitate the vague apprehension that unknown aspects of reality might lurk behind seemingly self-evident, completely normal collections of objects.
Every thing has at least two faces, what in an instance seems cozy can seem uncanny in the next. Just as closeness can have an attractive effect as well as a repulsive effect. Or as bare dread can be concealed behind trust. The eye as a motif, which Anna Lea Hucht is currently using in Majolika-vases as well as in her drawings, is always ambivalent. In the middle ages eyes were considered to be windows to the heart. With Anna Lea Hucht they become metaphors for an unfathomably rich, complex and not seldom abysmal cosmos.
(from Hübl, Michael, Die Fenster des Herzens und andere Abgründe in BNN, no.193, from August 22, 2007, p. 14)
www.meyer-riegger.de