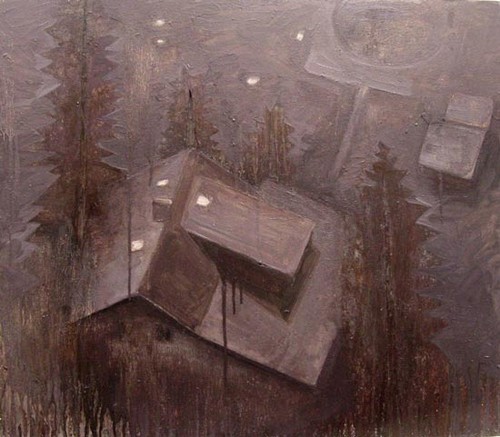 We are pleased to present “Waldgänger”, Armin Boehm’s third solo show at our gallery.

Investigating scientific and human borderline areas is the point of departure for Armin Boehm’s painting. The artist has painted a series of oil paintings belonging to the genres portrait, interior and landscape, which are allegorically close to the “Waldgänger” character– a literary figure by Adalbert Stifter which Ernst Jünger referred to in his book Der Waldgang (The Retreat Into The Forest). In his painting Boehm explores fringe areas and in-between-states in the role of an observer, which often implicate the thin line between science and lunacy, religion and occultism, and the pervasion of materialism and metaphysics.

The portrayal and contemplation of space ensues from a multidimensional point of view in Armin Boehm’s paintings. Boehm visually traverses various spheres – with a bird’s eye view of an urban landscape, the vista of outer space, or an interior or subterranian scene – which he imparts with a sense of (un-)earthliness by integrating symbolic elements and human traces within them. Rooms in which shadowy shapes are visible, as well as deserted rooms dominated by sources of light are declared to be actual places by Boehm through the use of figurative elements, yet simultaneously identified as non-places by their abstract appearance.

The imaginable, anchored in reality is also a fundament of Armin Boehm’s effigies. He often uses printed pictures of figures from the fields of philosophy and science as source material for his portraits – he transfers these images into the medium of painting in an abstracted manner. Boehm smudges the identity of the portraitees by effacing their countenances, thus shifting weight onto their sheer presence, as well as the gestural manner of his painting.

Boehm leads the viewer to focus on the materiality and surface structure of his paintings. By incorporating substances like aluminum foil, powdered metal or paper (in the manner of collage), and layering sheets of color by overpainting them, the artist creates a specific haptic character for each picture, which presents itself as a plane of depth in the eye of the beholder. In this process, the painting’s base - of canvas or wood – becomes the supportive membrane for Boehm’s alchimistic practise.

Inquiring after the idea of shape and appearance, Armin Boehm analyses the symbolism of shapes and contextualises these as an element of his painting that creates spatiality. A series of forms which were the basis of colour- and shape-formulas for the symbolic conveyance of thoughts and feelings for modernist painters constitute a seminal point of reference, as well as the studies on “occult chemistry”, based on clairvoyance, carried out at the beginning of the 20th century as theosophic analyses on the structure of matter.