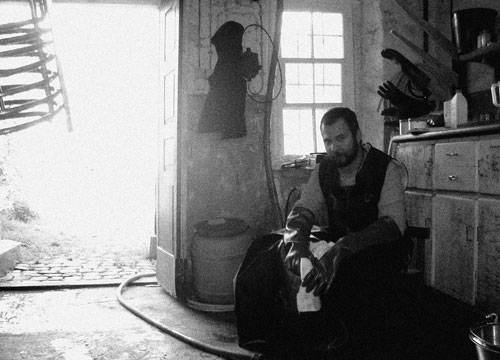 The publishing house »Revolver« was founded in 1998/99 in Karlsruhe by Christoph Keller and has quickly become one of the most important international art publishers for young contemporary art. In its first six years, Revolver has released about 500 book titles – focusing on a new interpretation of the artists’ book genre, exhibition catalogues, artists’ writings and audio projects. As a special feature to these books, artists’ have produced additional editions, original works like photographs, drawings, objects etc.
Two years ago, in winter 2005, Christoph Keller has withdrawn from his publishing activity and handed over the publishing house to a new team. Since then he works as a free and associate editor, book designer, curator and teaches at various international art academies.
In January 2007 a new series of conceptual artists’ books will be launched in collaboration with the Swiss art publisher JRP/Ringier – »Christoph Keller Editions« –, with books by Helen Mirra, Ryan Gander & Stuart Bailey, Peter Piller, Jonathan Meese/Slavoj Zizek, Mungo Thomson, Emmanuelle Antille and many others.
With the upcoming exhibition at our gallery, we would like to take a look back on the first 6 years of Revolver publishing. We have therefore made big efforts to search various archives for all still existing and available Revolver special editions, which have been released in collaboration with the artists/authors and have never been shown before. Many of these editions and multiples (app. 70 pieces) are still available in small numbers for reasonable prices.
In addition to those special editions, the exhibition also contains some selected pieces from the Revolver archive which provide an atmospheric perspective on Keller’s work as an editor and publisher. A larger amount of Revolver books by artists will as well be on display.
Yet, our view is not only a retrospective one. After selling Revolver in 2005 to a new publisher, Keller has taken over an old mill (and farm) in the Lake Constance region in the south of Germany where he now dedicates his time to a new project: the distillation of finest alcoholic spirits. As an important element of the »Stählemühle« mill, spirits have been produced since more than 150 years in the farm’s distillery, which has now been changed from an agricultural wheat distillery into an experimental production site of exquisite spirits from local organic fruit. Keller’s »Stählemühle« brand produces booze from elderberries, Persian cherries, Hungarian apricots, blackcurrant, plums, raspberries, Williams-Christ pears, apples etc. as well as herb spirits, sweet liquors, rubs and scents. In the back room of our gallery, we invite you to join the artistic »liquor store« and try out some of the booze!
The exhibition presents about 300 editions and works by:
Franz Ackermann, Dave Allen, Edgar Arceneaux, Thomas Bayrle, John Bock, Susanne Bürner, Gardar Eide Einarsson, Jeanne Faust, Peter Friedl, Douglas Gordon, Hammwöhner/Jakob/Vormstein, Isabell Heimerdinger, Christian Jankowski, Jakob Kolding, Korpys/Löffler, M+M, Michel Majerus, Lucy McKenzie, Jonathan Meese, John Miller, Jonathan Monk, Olaf Nicolai, Jorge Pardo, Peter Piller, Peter Pommerer, Jon Pylypchuk, Cornelius Quabeck, Tobias Rehberger, Gunnar Reski, Daniel Roth, David Shrigley, Michael Stevenson, Jürgen Stollhans, David Thorpe, Johannes Wohnseifer amongst many ...
www.meyer-riegger.de