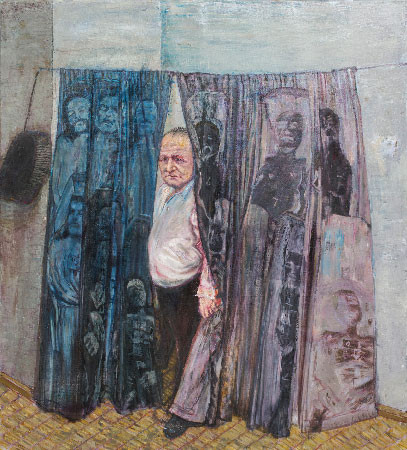 We are pleased to present “Modern Times”, the first solo show by the painter Gustav Kluge in our gallery. In his scenical portrait paintings the artist deals with opposites and contradictions, which reveal themselves as constructive discontinuities through the layering of spaces and situations as well as through the distortion of human features, and subtly retrace characteristics of contemporary society. Gestures and countenances are constitutive of Kluge ́s painting, as inherent narrative elements of the protagonists in the mostly large-scale portraits. The painter utilises an iconographic pictorial language, which embeds each portrayed figure within a superordinate context; as if it were in a case study. Gustav Kluge paints in a gestural, expressive style, with which the colour, (analogous to language) forms an autonomous subject and imparts a physical corporeality to the visually told story: Here colour is the material and the picture simultaneously. Kluge ́s manner of painting causes the substance of the paint to not only form an image, but to shape an almost sculptural effigy of the portrayed object due to the relief-like application of the paint. The artist spackles, pulls, spreads and dabs the oil paint with various instruments, thus generating various differentiated surfaces, interchanging between total smoothness and voluminous, porous paint layers that extend away from the painting. Gustav Kluge ́s manner of painting thus alternates between a creation and a rupture of patina through the spontaneous gestural brushstroke of alla prima painting.

In the exhibition Modern Times the artist combines various portrait studies and interior scenes, which can be seen as reflections on the effects of modernism. The painting Modern Times (Portrait Peter Weibel) is conceived as a mirror of sociopolitical liberalisation: The portraitee - artist and media theoretician Peter Weibel – is shown stepping out from behind a printed curtain hanging in a room. The source of the figures shown on on the curtain is a documentary photograph, taken within the course of the riots of the Paris Commune in 1870/71. The image shows ten corpses in coffins, lined up and numbered, who were shot by government soldiers during the street battles of the “Bloody Week”. Kluge embedded this photograph in his painting as a mirrored motif, and a positive as well as a negative black-and-white image. The lingering documentation of the dead people functions as a testimony to a revolutionary gesture, which - with the activities of the Paris Commune – is condensed to a socio-historical landmark and represents the outset of the Modern era. The progression of modernism is in turn embodied by the figure Peter Weibel in the painting. Mirroring, seriality and the minimalism of the gesture refer to the outset of a new medial age, in which the relationship between the medium and the construction of reality is ventilated, and where the body and its own visual language appears as a medium in its own right.
The interpenetration of construction and deconstruction is summarized in the painting Altes Tier (Portrait John Bock) (Old Animal (Portrait of John Bock)). The painting reveals a half-open interior scene, which shows the performance artist John Bock next to a fossilised hippopotamus. The scene wavers between being a definite place and a discontinuity of space – the physical aspects as well as the painting ́s narrative are counteracted to the point of breakdown, which is ultimately conveyed through the differentiated surface texture of the individual figures.
In De Dulle Griet the artist focuses on the aestheticisation of the self, which he captures and satirises in his work as abstruse and grotesque. The painting ́s title is taken from a painting by Pieter Brueghel ( ́Mad Meg ́) and it shows a modified version of Brueghel ́s subject, the ́crazy woman ́, extended to include a display of the musician Michael Jackson, and the image of a sculpture of the performance artist Paul McCarthy, in which he had mortified his body in a destructive act of creation into a self-sculpture. A flaming up of inner ideal images, as well as the obscuring of an unspoken desire is frequently expressed in a subtle yet concrete way in Gustav Kluge ́s painting.
One of his early paintings - Nachbild (Pyromane) (Afterimage (Pyromaniac)) – sketches a thin creature wearing a big helmet, which with lit matches plays the role of the arsonist and deforms the image of self. The retroactively visible as well as remnant memories compose a recurrent subject, which Kluge articulates sophisticatedly in his paintings. In seizing on a story passed on through history for example, as in the painting Penelope with the mythological legend of Odysseus ́s loyal wife, Gustav Kluge frames the story with a narrative context he has created. The series Women Under the Influence ultimately thematises the presence of latent psychological violence. In 24 portraits of women using magazine photographs as a point of departure, images of anonymous persons, pop icons, and art historical figures intermingle. Arranged in a tableau stretching over two walls ( three times four paintings on one wall and three times three on the other) the typology of these paintings ranges between individuality and interchangeablility of individual characters, eventually dissolving into a masquerade due to the repetition of facial expressions and the superimposition of the personal through a reversal of the colours into the negative. The title, taken from a John Cassavetes film, refers to taking on a role, which Kluge highlights in his practise of estrangement by creating a discontinuity in each likeness. Through reflecting and transfiguring certain images, Gustav Kluge ́s painting is a picto-performative act which pursues themes that illuminate modern antagonisms, and are retained in hiportraiture as decipherments of modern society.