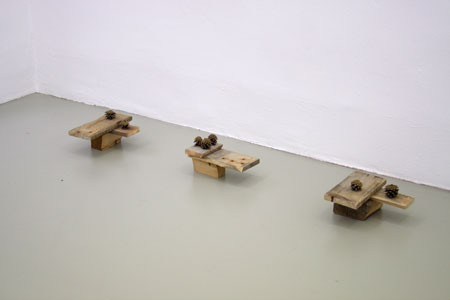 Meyer Riegger is pleased to present Waldau, Helen Mirra’s third solo exhibition with the gallery. Waldau is the name of the psychiatric clinic outside Bern, Switzerland, where the writer Robert Walser lived for a time. Mirra has recently been researching Walser, and specifically the Bleistiftgebiet (from the pencil area), and three paintings in the exhibition take their titles from his late novel "der Räuber".

Last year Mirra was a guest of the DAAD artist-in-residence program in Berlin, and was working in a studio on the edge of the Grunewald, the large forest in the westernmost part of the city. The sculptures in the exhibition were made in this context, with fragments of shipping pallets, and pine cones picked up from the forest floor.
These materials appear at ease with each other, while they also evidence their difference – the pallet wood is in a past tense - it shows marks of its previous use value, in commerce and the shipping of goods, and the pine cones, covered in seed scales, are a potential before. Rough, square cuts from the industrial chop saw contrast with the fine, but out-of-square, cuts that Mirra has made with a Japanese hand saw. Mirra's studio practice involves no power tools, and the tone of the works reflects the methods of their making. The small sculptures are quiet, and modestly contemplative, but their benign, impoverished appearance may indeed be misleading: they challenge the idea of what critical work can look like. The sculptures share a grammar, while each makes sense differently. Mirra's work is often referred to as poetic, and indeed Mirra engages quite directly in relation to poetry, but as shown here, her interest is less in the lyrical than in the metrical.

With a keen focus, Mirra's work engages structural and conceptual logics, resulting in a makeshift and uneasy beauty.

Helen Mirra’s recent solo shows include Galerie Nelson, Paris (2006), daadgalerie, Berlin(2006), the Dallas Museum of Art (2004), and the UC Berkeley Art Museum (2003). This year she also completed a large-scale public project on the University of Chicago campus. She lives in Cambridge, MA.
www.meyer-riegger.de