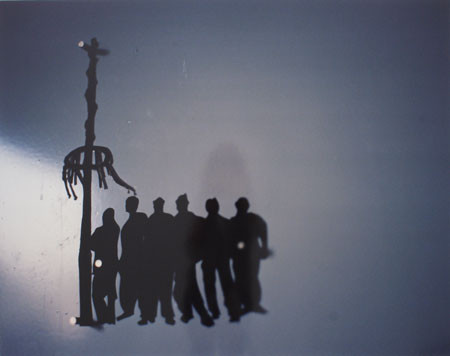 The film „excuse me brother“ works with overlapping layers and references to different metiers, and initialises an insecurity within the realm of familiarity, an insecurity regarding one’s own understanding of signs.
On a formal cinematic level, camera settings from various genres mesh, causing a subdued breach in the images’ narration (for example: the dissection of the praying mantis in level natural light seems like a documentary film, the cut to a close-up of Ibrahima resembles a feature film in lighting and cadrage.)
The protagonists’ dialogue shifts from the visible - the commentary on the dissection, to the realm of the invisible - the personal sensitivities of the characters within the course of the film.
This process is structured by a threesome variation of a quote from the lyrics of a song by the Mitchell Brothers: “Routine check”, “Check de routine”, “Check-check”.
By large, this thwarts the hierarchical relations that are expected due to their introduction on the image level.

Preparateurs of Social Reality
On Jeanne Faust‘s EXCUSE ME BROTHER

Faust’s latest film, EXCUSE ME BROTHER begins with a voice “chirping”, resembling a cricket or a grasshopper. This voice triggers laughter, which breaks off abruptly. The screen is black. Then we see a high-angle shot of a working space, mute. Two inexpert hands are dissecting a praying mantis. This setting corresponds with a voiceover giving instructions. The hands are following these rules of dissection; a rhythm develops between hand and voice, visual and audio.
The rhythm is interrupted by the musical modulation of “check, check”, already familiar from the introductory sequence: A second voiceover begins, ascribing the music, the refrain of the film to the ring of a cell phone, visible at the edge of the screen. A “battle rhyme” begins.
This exchange of blows is interrupted by cuts to close-ups of the adviser, the voice of the voiceover. Both shots show the character in a position which is liberated from the advisory function, disconnected from the story for a split second.
Now the white hands present the dissected insect. “Let her fly” is the reply, and then: “I will pray for you and the little animals.” The instructions become aphorisms about the non-existent.
What remains is the praying mantis with its spread wings pinned down. While the dissector represents the instrumental aspect – the realm of visible and locatable things- the advisor is the character of the voice, which modulates the image into another dimension.