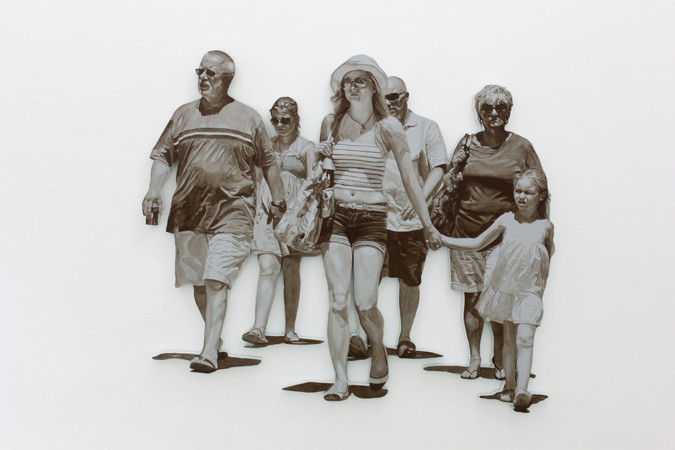 When the viewer enters the front room of the gallery Meyer Riegger in Karlsruhe, his or her eyes fall on a shiny, reflective sphere, which captures every gaze cast towards it and compresses all objects that approach it into distorted miniatures. This gazing ball throws us back onto ourselves as we stand there and thus makes us into a caricature. As such, John Miller invokes social models of identification and representation, which he observes and surveys continuously in his objects, collages, paintings, photographs and videos. Is it reality that is distorted, or the depicted image of it?
In his fourth solo exhibition at Meyer Riegger, Miller shows a new series of paintings that portrays clusters of pedestrians. Miller draws these figures for these from his "Middle of the Day” photographs, an ongoing series which records, among other things, people and their gestures in urban spaces. The composition of the captured moment hinges on the contingency of the situation. These individuals who stand in groups at street corners with searching, assertive or lost gazes now inhabit painted panels, scaled to the dimension of the group as a schematic cutout. Miller eliminates the
backgrounds in each scenes, and thus the context of the situation surrounding his subjects. He extracts them in their situative presence, between conscious gesture and idle observation, in order to present them to our view. They are extras on a canvas.
One could interpret these works, with their sepia brown-grey hues as a stylistic reference to Miller ́s own reality tv paintings. But while the latter feature mostly single protagonists lost in despair, the grouped figures in the pedestrian paintings engage in spatial movement and continual communication – which, nonetheless, seems to be increasingly forfeited with each step taken and each word spoken. On second glance, when one attempts to grasp the relationship of the individual figures to each other in the picture, it seems as if they are talking past each other, or talking to themselves.
This moment of monologue, of self-orbiting, tautologically circulating thoughts similarly appears in the music videos of the virtual band project ROBOT. Under this name, Miller and his fellow artist Takuji Kogo write songs with lyrics taken from personal advertisements. For these they produce both the vocal and instrumental parts synthetically, then pair them with video animations. In "My Name is Katy," for instance, street signs, synched to the vocals, appear after one another, advertising "Katy ́s" various virtues, . The video simulates a drive down a freeway in Los Angeles, where "Katy" lives. Arrows are point out her positive traits, underscoring the orientation and intensity of her assets in the manner of changing lanes on the road. The one-sided, frontal communication, recalls theater ́s “fourth wall”: "Katy" addresses a potential receiver, but she gets no reaction, since he remains indefinable.