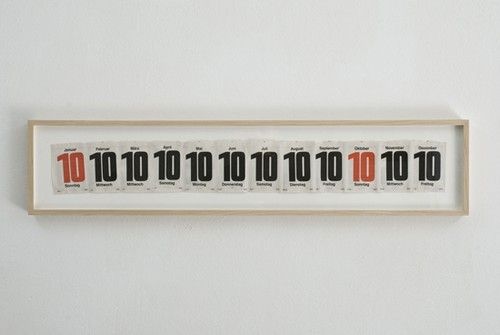 We are pleased to present “...so different, so appealing?”, the sixth solo show of the British artist Jonathan Monk in our Karlsruhe gallery space.

Jonathan Monk ́s artistic work has its origins in the contemplation and alteration of previously existent creative concepts: forms of expression derived from pop art, minimalist and conceptual art appear equally as strategies and parodies in his pictures, collages, objects, installations and films. In the process of quotation and simultaneous modification of the quoted subject matter Monk ́s work shifts between memory, imagination and a tangible condition. The artist attributes a distinct temporality to the individual piece, while raising the validity thereof to question – often in a humorous way.

In his current exhibition Jonathan Monk is showing fourteen different electronic devices from the area of home entertainment. Powered speakers, a flat-screen monitor, an iPod, a radio alarm clock or an interactive video game console – the new and functional brand name devices selected by Monk form a cross-section of the range of products to be found in an electronics retail store. However, the artist undermines their usability by presenting the individual devices in custom-fitted plexiglass showcases, therefore conserving them as objects.

By exhibiting consumer goods Jonathan Monk makes a direct reference to early pieces by the artist Jeff Koons: In the early 80 ́s series “Pre-New” and “The New” Koons presented kitchen and household appliances – predominantly vacuum cleaners – in showcases and on fluorescent lamps as an interpretation of the readymade. The transformation of the functionality attributed to an object into its purely visible form through the prohibition of touching brings the act of showing, and viewing itself into the foreground of Koons ́ series – as a form of voyeurism.

While Jeff Koons keeps his focus on the visuality of the specific object and its symbolic formal language, for Jonathan Monk the seminal point is more the renunciation of a perspective that is bound to an object. By enclosing, almost nostalgically archiving a current object of utility the artist undermines its topicality. In the process of repositioning these products Monk demonstrates their transient, finite, even replaceable substance, which defines the image of such appliances in a world where consumer attitudes and product development are always characterized by novelty.

The engagement with new forms of consumerism, which brings with it the question of contemporary awareness compared to historic awareness also forms a reference to early pop art subject matter. The question first voiced by Richard Hamilton in a collage in 1956, “Just what is it, that makes today ́s homes so different, so appealing?” is further pursued by Jonathan Monk in his exhibition of the latest home entertainment products, and emphasized by the quote “...so different, so appealing”, which serves as the title and a type of framework and contextualisation for the exhibition.