Of the few things we do, the only one we really do is to imagine what we will do. 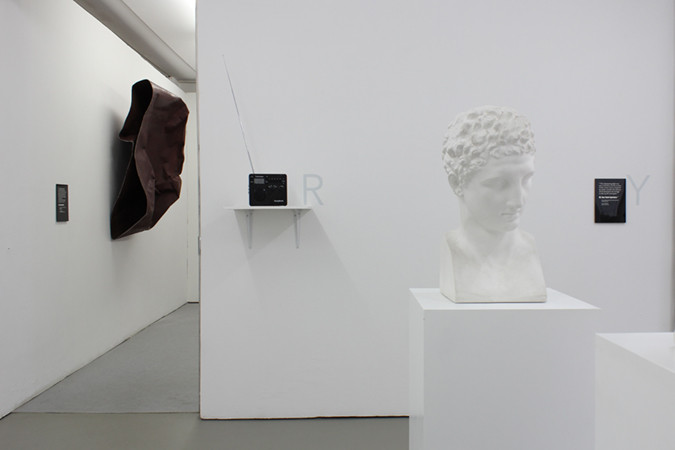 Of the few things we do, the only one we really do is to imagine what we will do. (John M Armleder, 2014) describes the concept of a possible construction of actions, that presumably won’t be executed. The concept of action becomes action itself. The possibility of an action is described - we could, but we do not have to.

Of the few things we do, the only one we really do is to imagine what we will do. also is the title of our group show-exhibition, in which positions of gallery Mehdi Chouakri are presented. The Berlin based gallery owner and old friend selected works, which evoke moments of appropriation, references and also citations of citations. Contentual coherences between Meyer Riegger and gallery Mehdi Chouakri are emphasized. Through substantial mergers aesthetic overlappings are educed.

An expanded form of citation is visible in Mathieu Mercier’s work. The work o.T unifies diverted metal-tubes into a web-like design object or even into a functional object, that fuses both crudity and fragility. Charlotte Posenenske’s Vierkantrohre Serie D turns the industrial object into an artistic form. The single components are always assembled site-specificly and are thereby installed in continuos alterations. Gerold Miller dissolves the boundaries between abstract painting and minimalistic sculpture. Monoform consists of two aluminum profiles identical in length, but varnished in different colors. These forms - both also forms of industrial design - mounted in a precise distance defined by the length of the form itself, transform the surface of the wall into an image surface and in the same time surround the defined space as a sculptural object themself.

58:22 & Some Words, in the sense of the Boîte-en-Valise, is a hand-held sound-exhibition of various works by Saâdane Afif’s. Included in a Flightcase are a radio, a transmitter, a poster and labels listing the announcement text of a radio host. But only the radio, which is playing musical interpretations of Afifs work and the poster and labels, as exhibition notices, are installed. Jonathan Monk’s citation of a citation however originates from Marcuse: the sentence „A place to which we can come, and for a while ‘be free to think about what we are going to do’.“ (Marcuse. An Essay on Liberation, 1969) has been set on the wall of an exhibition by Robert Barry in a politico-cultural context in 1970. Using the same typography as Barry, Monk just sets the name of the artist onto the exhibition walls and simultaneously refers to only the basic thoughts of Marcuse. A back reference to the exhibition - title is also is given.

Giulio Paolini instead practices the tradition of imitating an art historic example. Mimesi displays a pair of plaster cast portraits, which are copies of a 18th century statue, that in turn has it’s origin in Greek culture. The sculptures are placed in juxtaposition, seemingly looking at each other. It is a play with the viewers perception, as he finds himself excluded.

Further artists are: Salvo, Meuser, Gitte Schäfer and Eva Kot’átková.
Salvo’s painting Il matrimonio tra pieno e vuoto, tra astratto e figurativo e tra arte moderna e arte antica for example represents expressive colorfulness and through reduced geometrical forms and representations of architecture, which are supplemented by stylized floral forms. It stands in reference to the Pittura Metafisica. With their collages and assemblages of objets trouvés Gitte Schäfer, Meuser and Eva Kot’átková form the keystone of a homogenous enclosed exhibition. At that their positions also disclose the possibility of a thematic expansion. A possibility - we could, but we do not have to.