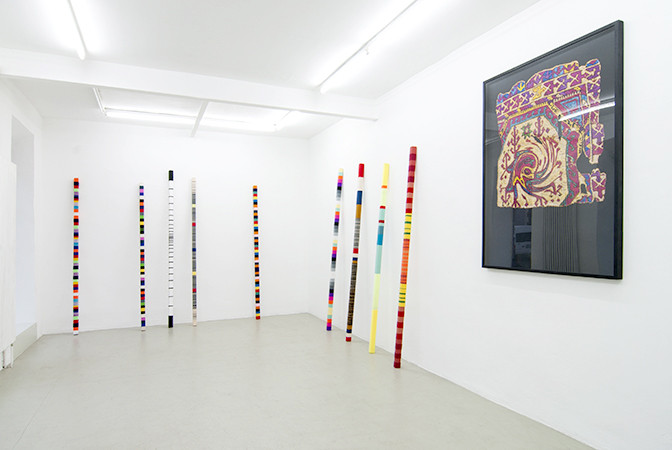 History is a sieve of the living and the dead. Artifacts are traces of epochs before; clues to an archival narrative that gives us continuity and meaning in the era of disposable culture.
With this in mind--the ruin, its fragments, and the wheel of reproduction ad infinitum, correspond in the two and three-dimensional works of Sebastian Hammwöhner. He is an artist who utilizes appropriation with the forensic methods of cultural anthropology and the contextual chess games of contemporary art.
A photographic image of archaic textiles from the Americas or Middle East reproduced in printed material then once again reproduced through a virtual interface is at once a representation of the functional and the illusion of such.
Floating in a pitch-black monochromatic field the colors retain their vibrancy while faded in some spots. The patterns accumulated by the interlacing weaves merge and separate into forms. A dragon wrapped around a caduceus staff or repeating graphs of contrasting geometric shapes are articulated in pastel; timeworn deteriorated edges heighten the reliquary effect of the “objects” as if exhibited in vitrines. To the naked eye these altered doppelgangers initially appear as the original, suitably framed for posterity. Displaced from their context Hammwöhner’s carpet drawings consider present day concerns with defining images. What makes an image worth looking at and what qualities make it last?
More cannibalized than ever the recycled photographic grab bag distributed from one media platform to another is rife with would-be representations of reality. This solid pool of black in which Hammwöhner recasts his retro-archaic textile “simulacras” is akin to phenomenology. They exist within that singular black found in the minimalist grid, Malevich’s radical early 20th century modernist reductionism, Goya’s late black paintings, and the virtualized inventory of museological archives. As in most carpets red is dominant, like the blood coursing through the veins, its a color at the end of the spectrum next to orange, and opposite violet; as of fire or rubies.
Parallel to the repeating forms that define minimalism, classic geometric abstraction (the painting/sculpture interventions of Daniel Buren) and 80’s neo-geo, the leaning poles are sculptural time-markers. Hand-in-hand with his two-dimensional works the square cut wooden posts are ritualistically hand wrapped with geometric precision in some parts, less so in others, depending on the thickness, texture, and color of the wool he uses. Haptic counterpoints bound in stock colors of yarn they act as three-dimensional echoes of the carpet drawings. Woven out of the same type of natural material, most textiles have long adhered to craftsmanship and beauty. Subconsciously Hammwöhner might be deconstructing the abstract elements found in carpets since the beginning of their artisanal origins.
Sebastian Hammwöhner picks up and furthers the unorthodox precedence of André Cadere. His pole markers are formally similar; in segments of his composition he allows room for "flaws" as Cadere did with his cylindrical “barres” in order to shatter the illusion of a perfect geometric form. Each play the chords of minimal art, however Hammwöhner’s color schemes reverberate with neo-geo abstraction while paradoxically ingesting indigenous tribal influences. With systematic logic and interdisciplinary methodology Hammwöhner contemporizes the archaic in the 21st century. Loosening canonical boundaries to reinterpret traditional forms of art he is at the interstices of what Heinz Mack called the immaterial apparitions.