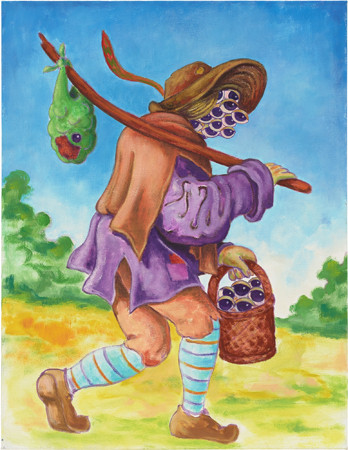 The eye, and with it the shape of the circle and sphere has been a subject of Uwe Henneken ́s painting for many years. Circular cutouts of landscapes, bubble-like rooms, planets, the bright corona of a fictitious celestial body, masks with multicoloured eye sockets, as well as the eyes of his painting ́s characters themselves: fantastical figures, ramblers, onlookers, seers, searchers, discoverers, dervishes. The schlemihl is a particular figure in Henneken ́s puppet theatre, wandering through the imagery of his paintings, always searching for himself or something else, doubting, driven.

The nomad in his new paintings recalls these figures too: Outfitted with a stick, bag and hat he takes paths which do not seem to have a beginning or an end. Or do they? Underneath his floppy hat, this wayfarer has more thain one pair of eyes to wander across Uwe Henneken ́s fantastic landscape with. The whole head of the figure in the painting "Eye away, to a rainbow deep inside", in the eponymous current exhibition at Meyer Riegger Karlsruhe, consists of eyes. The bucket in his right hand is filled with eyes. And the bag, which the rambler carries dangling from the stick over his shoulder, likewise appears to be stuffed with eyes. It even seems as if the figure were approaching an oversized eye perched on the horizon of the landscape, which in turn supervises him, while he sees in every direction. The gaze of the many-eyed figure, however, is able to span out radially, he always has more points of view in his luggage, and is prepared to take a look at himself and his perspective, and maybe even draw a circle around them.

Floating or dancing eyes, as they are portrayed in "Free days", fall in line with this. Winged eyes move across the painting ́s surface as free objects, at the same time, framed by ornamental shapes, they become a repeated pattern in the painting ́s background. The exotic ocular subject almost literally blossoms in Henneken ́s "The silence is unusually loud tonight", here, half-opened eyeballs bud and bloom on a branch. As in the initially described scene of the rambler, in Henneken ́s new paintings the eye becomes the landscape itself, or disappears completely in the nocturnal cosmos, like in the picture "Eye in the sky", in which the bright light of the moon reflected in isolated shiny spots reveals that behind the stars, yet more eyes could be lurking, that even the moon itself becomes an eye in before the backdrop of the night sky.

And so it comes to pass that Uwe Henneken ́s pictures inevitably look back at you, they meet their viewer in a similar way as the rambler meets that observing horizon – with reciprocal eye contact. The eye in his new paintings is not only motif, figure or landscape, it surrounds the canvas as a capsule, a base for colours and visions, representing an iris, an eye itself.