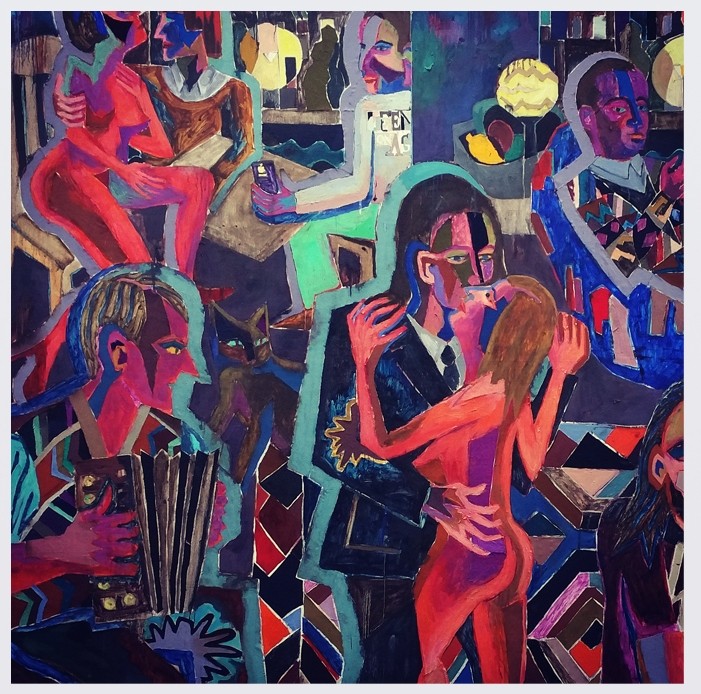 When I was still very small, perhaps three or four years old, I used to spend long Sunday afternoons, during which I was not allowed to talk or laugh, looking at my grandparents’ bookshelves and leafing in anxious silence through the heavy art volumes. One day, I discovered here a picture that especially captured my attention because it was painted in such a clumsy, gauche way: a group portrait, in which – with the perspective all askew – quite a lot of men and a few women were arranged in strange postures. “Hanc tabulam gallina pinxit”*, I whispered and put the book back on the shelf in a rage.
When, some years later, I looked at this picture, Au rendez-vous des amis by Max Ernst, in a museum in Cologne, I was of course already much more mature and understanding, and now I thought it so good that I stood looking at it for hours on end and fell into a sing-song chant that grew louder and louder: “How wonderful it would be to have lived in the Paris of those years, in the Twenties, and to have been one of the people portrayed in this picture!” I repeated mantra-like, faster and faster and louder and louder, until an alarmed museum guard escorted me to the exit.
By way of excuse, it must be said that I am not the only person with this obsession: a few years ago, Woody Allen even made a film (unfortunately only of middling quality) out of this idea. And in addition, every smart person knows that it is actually wrong to yearn for the old times, because the age we are living in is, of course, just as wonderful and interesting as fifty or a hundred years ago. Probably, it is even much more wonderful and interesting! And very probably, this is even the most wonderful, most interesting and happiest time in which people have ever lived!
If, therefore, in eighty or a hundred years’ time a thin student with a slight cough is standing in a museum looking at Armin Boehm’s paintings, in which now, in these late summer weeks of the year 2015, the artist depicts the most important people of his time, and if this student wishes he could go back to this era in Berlin, then I will step out of my frame and gently take him outside and tell him: “You’re right, it’s okay to take one’s bearings from the greatest men of the past, but now, in the year 2115, life in this wonderful, building-site-free gigalopolis called New-Deutschtown is much more wonderful even than back then when this city was still called Berlin. And now go outside, and live, and create ...”.

* This picture was painted by a chicken
www.meyer-riegger.de