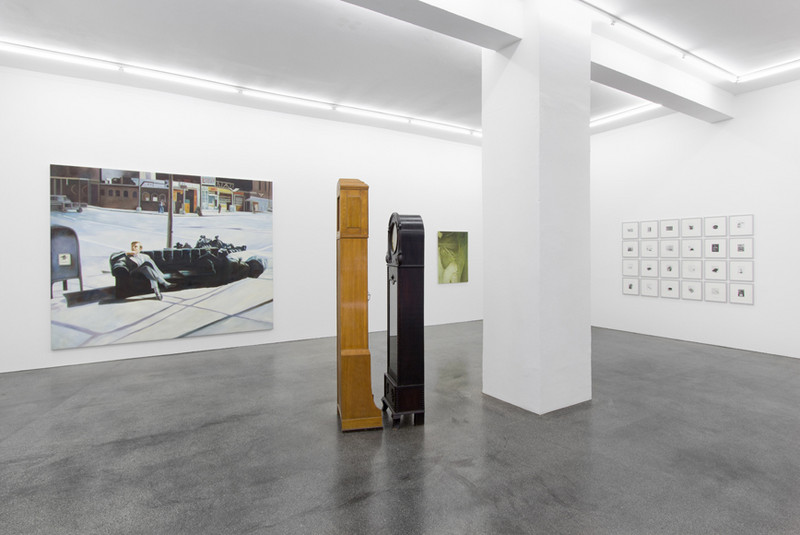 The representation of the human figure is one of the oldest pictorial forms in art history. Be it in sculptural form or as a painting, the ‘classical’ portrait served to present the person portrayed or to remember him or her, thus according the person a particular honour in the private or public sphere. Having originally emerged for memorial purposes, the portrait is a form whose task and significance can no longer be univocally stated – and at the same time the manner of portrayal and the formal language employed have opened up and changed. Against this background, the group exhibition ‘Hermann comes shyly in’ shows a wide variety of diverse contemporary positions adopted by a range of artists on the broadly understood topic of the portrait and portraiture. John Miller’s ‘156 Untitled Mirror Painting’ (1988) is based on two theoretical approaches: on the one hand, there is the second so-termed ‘anal phase’ in the psycho-analysis of Sigmund Freud and on the other hand the commodity fetishism articulated by Karl Marx. In addition, through the incorporation of a mirror, the artist also thematizes the subject/object relationship. There are similar, analogous things going on in Jamie Isenstein’s sculptural installation ‘Eyehole’ (2006), in which the beholder is invited look through a keyhole. If one follows this indirect, curiosity-driven or human-response instruction, one finds oneself being stared at by another eye. Is one looking at someone else’s eye or at oneself? The grandfather clock installation ‘The Odd Couple (German Version)’ (2008), one of two works by Jonathan Monk, symbolizes long-term interhuman relationships: the two ancient grandfather clocks are at first wound up together in unison – but after some time each develops its own particular rhythm. In ‘The D.E.A.R. painter seated on the C.O.R.N.E.R.’, part of his series relating to Martin Kippenberger, the British artist refers to the much-revered German artist and the latter’s ambivalent relationship to commissioned art. At the beginning of the 1990s, Korpys/Löffler documented the cells in which individual prisoners lived in the state prison in Kiel, North Germany. Three years later, the prisoners proposed a trade of the habitual in-house currency of cigarettes and coffee in exchange for objects from everyday prison life that are of value to prison inmates. Subsequently, the artist duo photographed all the objects purchased, which can be seen as 24 indirect portraits of the prisoners in the work ‘Schatzinsel’ [‘Treasure Island’]. As so often, the inspiration for Julia Schmidt’s new work ‘Untitled (cruiser)’ comes from fashion advertising in a glossy magazine – in again re-working this material into a piece of art, the artist is playing with the transformation of values. For her work ‘Correspondances’ (2012), Katinka Bock asked fifteen different people around the world to keep an empty piece of A3-sized paper over a period of time in the place most important to them. Each individual’s personal way of treating the sheet of paper gave rise to abstract portraits of the participants. There again, the model for the bodily impression in ‘Untitled’ was the hollow indentation in the ground left by a wild boar, which the artist Björn Braun came across when out walking in the woods. Uwe Henneken’s new paintings are based on the theories of Terence McKenna and his research into the expansion of consciousness and shamanism – the shaman as the origin of the artist. Eva Kot’átková‘s whole-wall installation ‘Birds in the park‘ (2015) is concerned in a variety of forms with the fears children have. The eponymous work by Robert Janitz (2015) straightaway caricatures the ‘classical’ portrait by adhering to its parameters in terms of both content and form and yet showing an abstracted rear view of the back of a head. The third series presented in the exhibition is Ján Mančuška’s ‘The Other (I asked my wife to blacken all parts of my body I cannot see)’ (2007) – the result of his getting his wife to black out all the areas of his body, which are invisible to him. Also on show are works by Gabriel Vormstein and Miriam Cahn – each following the traditional attributes of the portrait, yet coming to terms with them content-wise in a variety of very different ways.
www.meyer-riegger.de