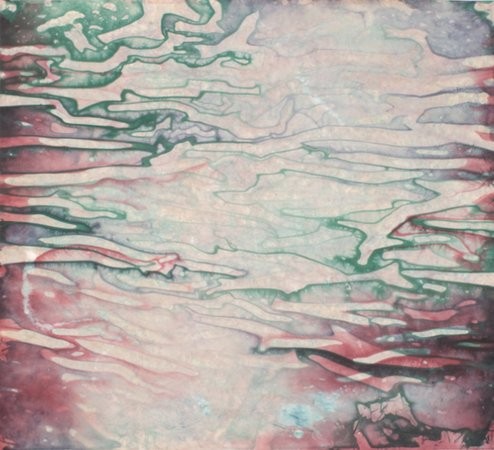 August traces the social threads that comprise an artist‘s creative life. Eschewing an overarching curatorial logic, the exhibition centers on a series of dialogues highlighting the sympathies of the participants.

This project began as an exquisite corpse: I invited my former classmate Rachelle Sawatsky to propose an artist with whom she feels an affinity. Rachelle invited Shannon Ebner, our colleague from the University of California. Shannon, when given the same prompt, invited her longtime friend and former classmate Adam Putnam.

Writing on the theme of this year’s curated by_ vienna, Eva Maria Stadler situates painting as “part of a discourse” that extends beyond both artist and artwork to become “comprehensible as a social process.” August could be described as a portrait of this process, as the chain of invitations reveals influences and affiliations that far exceed disciplinary bounds.

In preparation for the exhibition, the artists convened for a weekend in August. Adam flew from New York to Los Angeles with a suitcase of photographs, initiating the first in a series of intensive studio visits with Shannon and Rachelle, whom he was meeting for the first time. This fruitful period is documented in a free reader that accompanies the exhibition, and in the artworks and architectures, which were selected and designed by us four. In Shannon‘s electric poetry, Rachelle‘s tactical expressivity and Adam‘s ever-unfinished architectures, desire is imbued with a critical potency shaped over years of conversation. Curating, in short, has also become a social process.