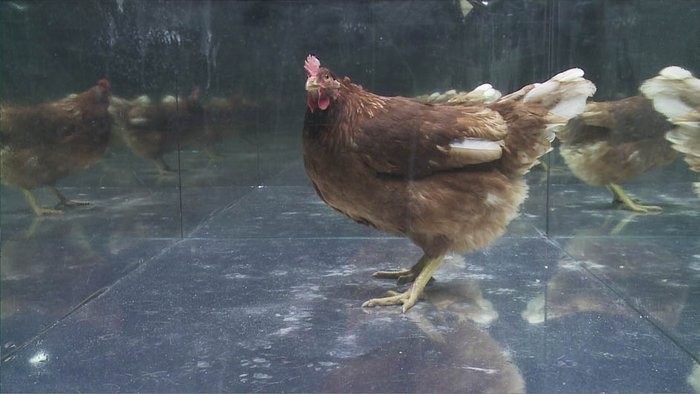 Social and medial transformations and their effects on person, space and time have preoccupied the artist Bernhard Frue(hwirth) for more than a decade. He takes his own biography and perception as his starting point in order to engage in observations in his surroundings and capture them in conceptual works, which occasionally have something absurd and obsessive about them as well. A fetish-like fixation on an object or observation (...) consistently inspire new groups of works which are placed in a scenographic context in the artist’s exhibitions. [1]

Bernhard Frue’s second solo exhibition in Galerie Mezzanin is titled Sur Rendez Vous, in English – By Appointment. Part of this formal term is Redez Vous, a personal and often romantic encounter. The most personal nature of “Rendez Vous” : a meeting with oneself. Under this title Bernhard Frue presents works from new series as well as those from last year. The subject of portrait as a form of re- and self- presentation permeates the artist’s (b. 1968) images and installations.

A selection of faces from Bernhard Frue’s artist book PHESBUK[2] has been placed on the glass windows of the gallery’s facade.

“I began work on this book during my first stay in the hospital when newspapers represented a window and contact with the outside world for me. An initial visual and emotional stimulant were people who were permanently covered in the media and who upset me, which was also physically tangible due to my weak constitution. I quickly lost interest in celebrities and the selection of photos focused on the faces of ‘unknown people’. The cut-out faces are all that remain of the flood of information.” [3]

Frue “traced” hundreds of faces with a ball point pen until they separated themselves from the newspapers and magazines. Through further editing in various ways they become distorted and/or accentuated as a whole or in detail. Consequently the selection process interlaces itself with the composition. Torn from their original context, Bernhard Frue arranged the faces as distinct archetypes in his artist book.

They draw closer to the classically representative portrait through their enlargement and installation. Through their presence in the exterior space they are inserted into the urban streetscape once again, and thus led back into the public sphere.

IchWillDichBraut (I want you bride)

Installed in the first room is a mannequin, dressed in a wedding gown with the label „I don’t want to meet you“. A drawing by Bernhard Frue is printed over the writing, which is inspired by a drawing of an abused child (Ich will Dich, 2012). With its constructed and purified face, the mannequin is mirror – the artificial and mathematical physiognomy as the “ideal” reflection - and toy at the same time.

In the Main Space

The large format UV-Prints on maple veneer are based on drawings that Bernhard Frue created through the superposition of several silhouette-like stencils, found on the Internet, of mostly well-known personalities. For example, the work PumpMelvilleAHaile shows the outlines of a pumpkin face, Herman Melville, an anonymous person and Haile Gebreselassi. “All ages generate types with similar physiognomies,” is Frue’s comment on these portraits created from fragmented overlays. The way they have been worked gives them an appearance reminiscent of washed-out, tattered and discarded woodcuts, which restores some plasticity to the faces.[4] The medial transformation strengthens this effect. The size, materiality and classic hanging suggest – just as the faces on the façade – the representative portrait.

In the video works Ket and Tschicken this failed attempt at forging identity is taken to an extreme with humour as the physiognomy and self-awareness of animals and not people is the subject of investigation. Cats and a chicken find themselves in an internally glazed mirror box and are obviously being confronted with their reflection for the first time. They are left alone with endless reflections in a confined space. The chicken does not appear to be perturbed by the situation at all. Strutting slowly back and forth, it peers at itself in the mirror. The two cats are visibly more unsettled and soon flee from the mirror box. The mirror box Gefäss, the actual filming location of the video, is also exhibited and seems to float in space despite its weight. [5]