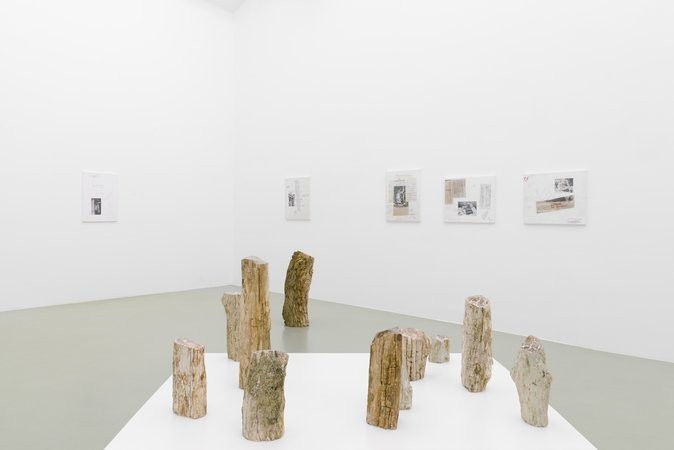 In the exhibition prezjnt everything revolves around mechanisms of remembering, saving, storing and reviving things thought to be already lost. With a series of cross-references Christian Mayer creates a dense network of installations, which, for short moments, reanimates the preserved time through the use of various media.

32,000 years ago a squirrel buried plant seeds in the Siberian permafrost soil and in 2011 Russian scientists excavated them. Over this incredibly long period of time a small bit of life survived in the seeds, which could be reactivated in a high-tech laboratory. A relic from the ice age now grows; an already lost piece of nature is being reawakened.

Christian Mayer is fascinated by such moments in which relations intersect with things and matter attains meaning. For this reason he had an image sent straight from the laboratory, which depicts the small plant shortly after its first growth. This image is the point of departure for the photo series Silene, in which the contexts from image and image carrier condense more and more.

Also the process in which the image was reproduced is by now almost obsolete. Dye transfer was considered for a long time to be the best and most durable color process in photographic history, and is to this day unparalleled in quality. However, when Kodak discontinued the production of the necessary materials in the 90s it appeared that this chapter was also closed. Today there is only one place in the world where such prints can still be produced. Christian Mayer intentionally applies the technical features – the consecutive application of the three basic colors cyan, magenta and yellow – of the dye transfer process incorrectly, in order to instill the image with an artificial distortion. As he only ever exposes two of the three colors superimposed on one another the image is divided into three images in every possible color combination. The lab-like, artificial context of the non-descript little plant is connected through the lab-like process of the picture development.

200 million years ago, in what is now Madagascar, there was a major flood, which led to thousands of tree trunks being uprooted and carried away in a powerful current over a distance of 300 kilometers. Finally, they were deposited in a flood plain, under water and without oxygen, where they could not rot. Another natural disaster that followed shortly thereafter was the eruption of a volcano, which spewed out fine ashes and covered the area with a thick coat. The resulting mash of various sediments slowly soaked into the tree trunks and led to a very slow process of fossilization of the trees. These trunks are a three dimensional representation of the original organic materials, witnesses to the transformation of time.

Time capsules are a cultural phenomenon of the Modern Era, which especially spread in the USA in the second half of the 20th century. A typical time capsule is a storage container that should only be opened again after the lapse of a specific time interval, with the intention of passing things typical of that time on to the next generation.

However, the black and white photographs, which Christian Mayer collected from abandoned archives of American newspaper publishing houses, have meanwhile themselves become something like time capsules. Without the context of the archive, which the images have lost by now, they drift homelessly throughout flea markets or go missing all together. It is exactly here that Mayer’s interest begins: when things have lost their function, have been removed from their time, then, through a deliberate reactivation and context shift, they can release a particular energy in the present time.

The artist found the back of the photographs especially fascinating, which are all marked making each picture an unique original: handwritten notes by the photographer, stamps from the archive, attached newspaper articles in which the images were printed, etc. By using an enlargement of the reverse sides as the passepartout for the original photographs, the image and its specific time context merge, becoming inseparable and tell a new story.

A time capsule was designed for the 1937 World Fair in New York, which was only supposed to be open again in 5000 years. However, since the organizers assumed that in this distant future English would no longer be understood, a linguist was commissioned with finding a solution to this problem. Consequently, he designed diagrams and a neo-phonetic alphabet, which should serve the people of the future as a key to decipher the English language.

Already nowadays languages all over the world become extinct every year, and with them a collective knowledge that was linked to these languages. For example, the residents of the Canary Islands have always spoken the whistling language, El Silbo, with which one can have an entire conversation from up to 3 kilometers away. However, in the age of mobile phones and Internet this skill of communicating over long distances is no longer necessary. Now, there remain only a few residents of the island La Gomera who have true command over El Silbo. In the video one of the last speakers of this language tells the story of the two canary birds Bibi and Büberl who were brought to Vienna in the 19th century as a gift for Emperor Franz I. Because he loved his birds so much they were stuffed after their death and draped on an object as if they were still alive sitting on a branch. Today the birds are found in the collection of one of Vienna’s museums and have already appeared in one of Christian Mayer’s exhibitions at Galerie Mezzanin - another level of memory that reveals itself here...