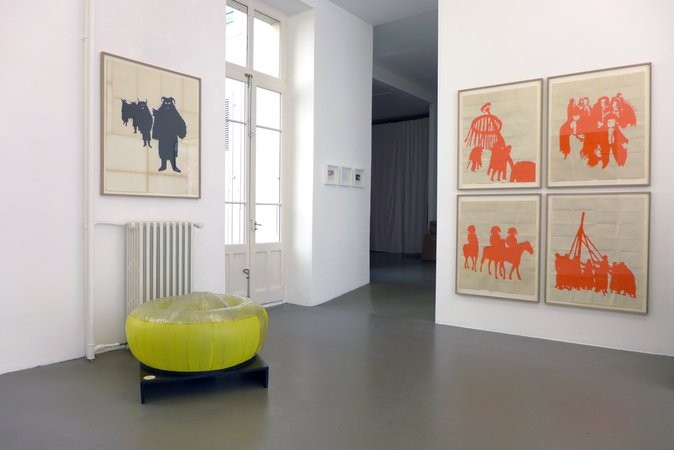 This exhibition’s title comes from a 1951 poem by Marianne Moore (1887–1972).
The American poetess was dreaming what balance could be found between the most abstract geometrical discoveries and the realities gained by observing the environment. She reminds us that the structural understanding of a sparrow’s nest made of an intricate weaving of twigs and that of the gigantic Egyptian pyramids equally resist engineers’ reasoning. Thus, for her the mere observation of nature could allow a new perception of space, and from there appease relations and exchanges between modern men who have raised science at the highest level.

This portmanteau word condensing icosahedron and sphere opens an imaginary field of thinking both vernacular and modern. Once the twenty faces of the icosahedron are blunted it tends to a sphere, allowing the most rigorous formalism to soften. Filing down the sharp edges of a series of cracks could render modern narrative’s normative hagiography more familiar. We could add to them our gaze, our stories even the most vernacular ones. Modern heroes would then become sentient if not sensitive observers like anyone else.

This other possible narrative is present in several of Ulla von Brandenburg’s (1974) works in that they often make strangeness and mystery appear at the heart of modern references like popular culture motifs, to name but one. As for Dove Allouche (1972), he interrogates scientific observation’s ability at producing images and turns them into ghostly apparitions. Materials, scales, and dimensions become blurred and leave nature be, once again, a source of wonder. For decades Hans Walter Müller (1935) has elaborated a radical architecture rounded off by air. His inflatable structures, however translucent and ephemeral, are visible evidence of an architectural thinking that hasn’t lost a bit of its utopian sharpness.

This exhibition is conceived like an unlikely stroll in the garden the world has become. Although it could be represented in the form of icosahedron as Richard Buckminster Fuller imagined, it keeps all the irregularities and brightness of a natural sphere.