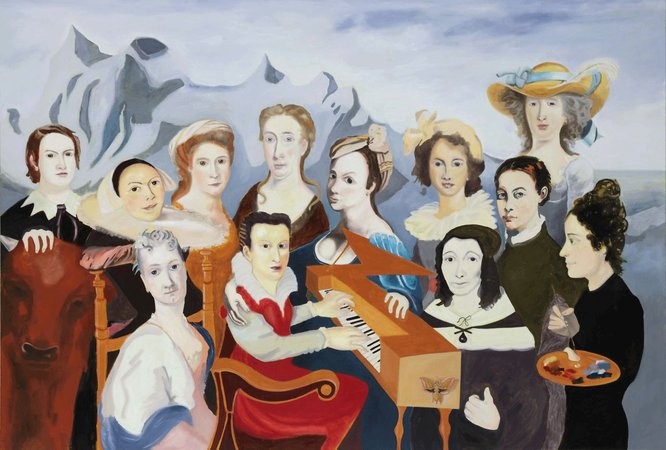 1.
Helping shape the ATTITUDE towards painting in the own work – that is what Katrin Plavcak’s art is about. In her exhibition “Tools & Accessoires” this means, among other things, that she addresses the relationship between sensory perception, aesthetic production and pictorial space. Namely, the pictorial space for Plavcak hardly presents itself as perspective, thus, illusionistic, but rather varied, often put together out of different two dimensional, sometimes distorted and “wavy” levels. For the perception of these images this means that a “flat vision” then assembles these plateaus into the (anti-) space grammar presented in the image.

2.
“You are the SOCK on my hand”, sings the Berlin band “Käptn Peng & die Tentakel von Delphi” and also alludes to the function that ordinary socks sometimes play in the puppet theater. Katrin Plavcak shows us in her painting “Aber Socken!”, 2014, two checkered socks in front of a background made of small diamonds and alludes succinctly, but also consistently, with her hand painted socks to the relationship of handiwork and footwork, to cultural activity and movement.

3.
COMPILATION. Plavcak continually combines images with objects in her exhibition. The latter mostly consist of a cement base in the shape of a pot, in which various (walking) sticks, crutches and supports are stuck, with objects attached to their tips, for example paintbrushes, plastic bottles, (hunting) knives. These objects not only allude to the process of painting, but as walking aids, also decidedly refer to the process of movement, in which painting is inscribed in various ways; as the stroke of the brush in the moment of production, for example, or as the gaze that wanders over the screen and through the image space while observing. This moving gaze perceives this image-object-pair as nearly one work, as a tight ensemble that disrupts, complements and contradicts. Furthermore, the objects reveal through their three-dimensionality the flat two-dimensionality of the paintings placed behind them. The walking aids become like visual aids.

4.
EN PASSANT? What is really important in an image? Where does the merely decorative begin, which is frowned upon in the “serious” art? Where does a minor matter – that is perhaps more than a chic accessory – no longer fit into the composition of an image? Or is the problem of accessories only a question that is relevant in fashion and design? Isn’t nowadays the inappropriate a sign for aesthetic quality? It is exactly these questionable balances that come up in “Tools & Accessoires”, for example when in the image “Schöne Wasserkrawattenmühle von Gennep”, 2013, a (ordinary) tie serves as the canvas for the (venerable) van Gogh painting “Wassermühle in Gennep”, 1884. Is the tie a gaudy, post-pop, distracting joke – or is it a precise reference to the social class of the Spanish collectors who bought the van Gogh image, but likely didn’t pay taxes on?

5.
IMAGINATION: The “portrait” of an ageing man is on view in the image “Let’s go Camping in the Forest of Blood and Horror”, 2014. The spectacled man is a cult director of horror films and, as such, naturally thinks out scenes in his head that will end badly – and in which one nevertheless enters. A camp in the woods at night is visible in the upper half of the man’s head; several corpses lay scattered around. The glasses belonging to Jess Franco, who is imagining this disaster, have one glass and one wooden lens, and therefore, the director – painted from a newspaper photo (quasi recycled) – can only look out from the image with one eye. And so the aforementioned two-dimensionality makes an appearance again; namely looking with one eye is - as is known - without perspective. In front of the image hangs a wooden rod with a paint roller on one end. The “real” wood of the rod and the wood in the image promptly begin to fight, realism and illusion, volume and flat surface contradict and complement each other simultaneously.

6.
LANDSCAPE: A recurring motif of the image space here is that of the landscape, whether urban or more or less “natural”. Forests, villages, the façade of the artists Berlin studio, for example, are to be found. Especially the latter view in the image “Weiches Haus”, 2014 fascinates; it is Plavcak’s legible attempt to reach abstract form by way of representational depiction. This is also a movement away from illusionism, a movement, which requires artistic experience, as well as the wish for material concreteness, something actual in the art that then stands beside an immaterial idea of the world, which recognizes itself as an imagination, an idea that perhaps ends badly like with “Jess Franco”, but that, like painting, always continues...

7.
COLOR MOVEMENTS: The colors in Plavcak’s works stand out not least through their strong, almost jarring intensity. The colors appear a bit cheap – pink, metallic blue or light yellow, for example – but they still purport, similar to the sequins sometimes applied to the artists sculptures, the appearance of value; a value, which exactly because it is questionable, does not come across as tacky. Above all, however, this color palette succeeds thanks to its glitter, in again making evident the aspect of movement. The aggressive pink, for example, in the just mentioned painting, “Weiches Haus”, 2014, gives an odd glimmer to the façade of the artist’s studio, despite its standing sturdy and its nearly flat representation. Like with most works by Katrin Plavcak: it is not all exactly as it seems to the customary view, to the conventional imagination.