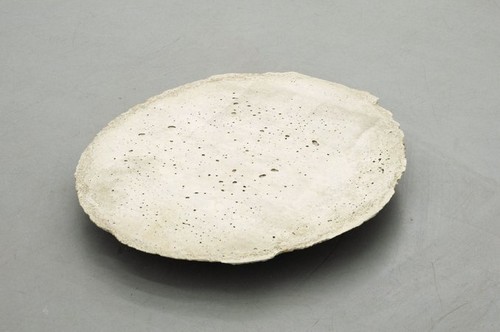 Galerie Mezzanin is very pleased to open Michael Hakimi’s first solo exhibition in Vienna. Despite their semiotic character and clear forms, in a variety of ways Michael Hakimi’s works create connections to their surroundings and the contexts which determine them. Relationships to space, bodies, the conditions of perception and to each other, which are always expressed in new forms, intersect in them.

However, the works in this cross of coordinates repeatedly attempt to reflect on a horizon beyond the gallery walls far above their concrete local references and their limits. In the process representation and narration can be observed in development, but the question is also posed as to how far political issues can be addressed or even described at all by means of a grammar of forms.

Like the title "Connecting the Dots", the exhibition itself appears able to be read in two different directions.The first would be morphological which to all intents and purposes casts lots with the forms in a way that arranges somewhat mercurial series of permutations between a circle and a square and establishes the changes of meaning occurring in the process. Whereas the other reading attempts to allow the resulting meanings and their sometimes extremely charged symbolism to merge into narration.

One reading appears to torpedo the credibility of the other or even drive it into absurdity in their respectively very suggestive but seemingly mutually exclusive appearance. When, for example, a story of a street fight and contested media (it is presumably not a complete coincidence that such a constellation is reminiscent of the events after the Iranian presidential elections in summer 2009) is so to speak organised in “visual rhymes”. However, on closer inspection it can be seen that in addition to this conflict between readings there are also fine transitions in which the relationship between form and content appears to be open for a moment in its dichotomy but also inseparability.

Places where threads converge. Where there is a concentration of things that come heading towards each other from all possible and impossible directions. We would like to believe that these places offer a greater overview than others. Where things connect that remain unconnected elsewhere, which otherwise possibly happens without any prospect of mutual acquaintance, without knowing about each other.
It is now only the name of the Berlin underground station Gleisdreieck (literally “rail triangle”) that is reminiscent of its original function. The original tracks, which were on the same level and connected the Anhalt, Dresden and Potsdam lines in the form of a triangle, were rebuilt in the 1910s into a two-level station with tracks crossing each other at different levels.
Today the lines U1 and U2 cross each other at Gleisdreieck on the two levels of the viaducts. In addition, from north to south a long-distance railway line in an underground tunnel cuts through the site, which is however largely impassable for road traffic and pedestrians. The paradox in this is that a huge number of people passes Gleisdreieck every day without being able to gather any information about Gleisdreieck as a place. Road traffic is directed around the site located between Schöneberg and Kreuzberg. Streets which lead to Gleisdreieck, such as Schöneberger Kurfürstenstrasse, end as a cul-de-sac. It is just as impossible to get off a train and leave the station at Gleisdreieck. This place is a non-place. The paths of many people converge here but only to separate again immediately. Coincidental point of intersection. Loose threads.

With “Connecting the Dots“ Michael Hakimi (b. 1968) very precisely describes his first Vienna solo exhibition. Which could sound a little like a promise. A promise that we would perhaps also expect from an exhibition in any case. Ultimately threads usually come together in an exhibition. It represents a place in which works which are normally created independently or perhaps even with a view to potential income must at least be able to “get on together” temporarily. Here they do in fact make contact with each other. They could indeed do nothing else. Nevertheless, for its part the exhibition forms a framework of another order in which something (perhaps exactly what is expected or something completely different?) promises to happen.

Hakimi’s works are repeatedly described as acts of formalisation. How he checks information for its semiotic character, form and substance and signs for their ability to represent and communicate. This sounds like a considerably “more abstract” arrangement than it really need be. (It is however an arrangement which can most certainly be found in the first impression triggered by his works and the exhibition tableaux in which he brings these works together. Words such as “reduced”, “concentrated” and “simplified” – but also “code-like” or “enigmatic” trip quite easily from the tongue to describe it.) However, the impression of the simplified-abstract should not conceal the fact that Michael Hakimi’s deliberations take place, so to speak, close to material. Acts of formalisation can take place with hand movements, with the help of a saw or with a mouse click in the Photoshop tool box. They are a result of formal, technical and conceptual search filters. They can just as easily be exemplified in a stencilled silhouette in glowing colours on a black background as exchanged for the association of a dramatically illuminated landscape.
In precisely the same way as material, from the sole of a shoe to the sign, media play a special role for Hakimi’s works in a literal as well as figurative sense. To this end material and medium often enter into precarious alliances. Where and how it can happen that meaning becomes concrete (or otherwise vanishes somewhere). What constitutes a sign physically or under what agreement it must occur so that it either conveys an important message or simply precisely presents a little of what it is. What would be thought of the powerful crowing gestures of the victor as long as bullets are flying around his ears?

On the one hand ”Connecting the Dots“ creates very fragile and partly quite obvious nodal points. What probably play no special role are the limits of taste. A fragile dialectic connects material and media, forms and signs. And after various directions, threads, surplus remains and productive connecting points protrude. Some things “see” themselves considerably more simply than they could be precisely “read” as facts. How complicated it can become mainly depends upon our willingness. But it can always become complicated. And that is not so bad.
Translation: Steve Gander
galeriemezzanin.com