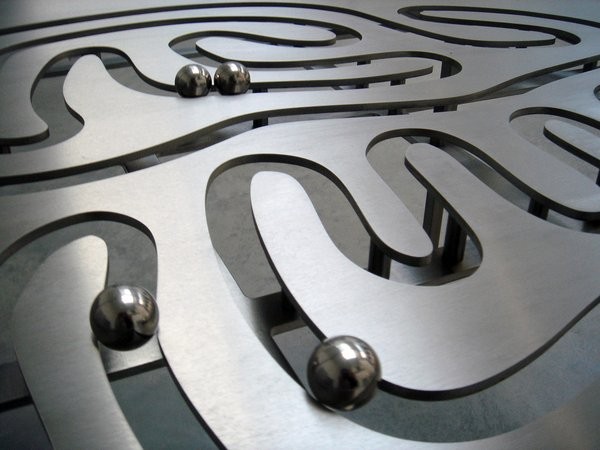 We are delighted to announce the fourth solo exhibition by Peter Kogler at Galerie Mezzanin. The exhibition comprises large scale sculptural works and collages, which pursue Kogler’s ongoing exploration of concept through form, using the theme of ornament as a cypher for the position of the individual within modern society.

„All Kogler’s works present themselves as fragments of virtual, endless rows, whose beginning and end remain hidden from the observer.“ Boris Groys, 2004, who continues; „ (They) suggest an unending etcetera—the eternal continuation of something that always remains the same. In this respect, Kogler’s works stand in succession to those of the minimalist artists of the sixties and seventies, such as Daniel Buren, Sol LeWitt or Donald Judd.“

“In Kogler’s work, unlike Daniel Buren’s or Sol LeWitt’s, all the fundamental motifs that have brought him to international fame in the last (...) years — the ants, the tubes and the human brain motif—are not in themselves abstract, content-free symbols but are deeply linked to something figurative that immediately activates the desire for readability, narration and translation. And, for Peter Kogler this is what makes them usable. For what is crucial to his artistic way of thinking is generating symbols that achieve their own autonomy precisely because they can bear different, ambivalent meanings.” Stephan Berg, 2004

Apparently infinite is applicable for Peter Kogler’s sculpture; Untitled, 2011 – a black coated aluminium column of overlapping ants, cut into the metal by a computer controlled laser cutter. “(...) as far as the ant is concerned, even media theoreticians like Vilém Flusser held it to be an eloquent symbol for the reality of life, one that oscillates between virtual artificiality and the unchallengeable laws of nature.“ Rainer Fuchs 2008, who continues; „Kogler too saw an ideal motif in the ant. Its symmetrical body and ability to build and use labyrinths as systems of orientation and activity also reconcile those contradictions in human society whose relationship to each other needs to be redefined under the conditions of mediatization: namely, the organic and the technological, the individual and the collective as well as the ornamentally abstracted symbols and the tangible sensuousness of life.“

Next to the ants – the brain and the lightbulb, old friends of Kogler’s motif universe, are found in the exhibition. „ “Equally important to the twentieth century is one of the motifs itself, the light bulb. It displays structural efficiency, it changed the way we live, and quickly became an icon. As the prototype of invention the light bulb stands, as it were, for the idea itself. Thinking is represented instead by the brain (...). They are (...) abstracted representations, which develop equally from a transformation of geometric forms (...). A rationalization of the basic material takes place, an act that mirrors the contradiction between the maze-like form of the brain that is entangled in itself and that which captures arising rational thoughts.“ Severin Dünser, 2010

It is often organic and at the same time social systems of order which Peter Kogler tries to capture thematically. In the last exhibition space eight framed collages are installed on one wall – images from different medias, collected over years, layered with pen-plotter drawings – all fixated with magnets. “At the same time the preconditions of technological work processes are most closely linked with artistic concerns. Beyond the attempt to give computer processes, which form the basis of the image world of computer graphics, an aesthetically perceptible space, the structures and phenomena which go to make up digital communication are questioned. The complex structure of data flows is examined for its interactions with processes of movement in the world of physical experience. (...) „In that we contract, we are habits, at the same time we contract through contemplation,“ (...) so Deleuze in order to trace the dynamics of repetition. Contraction and relaxation, the swelling and subsiding of bubbles and bodies could be drawn upon as leitmotifs for Peter Kogler‘s works. With them, the artist who sees himself as connected to the communications system, as part of the digital network, describes the complex layering of information and data transfer and at the same time examines its links back into social relationships.“ Eva Maria Stadler, 2007
galeriemezzanin.com