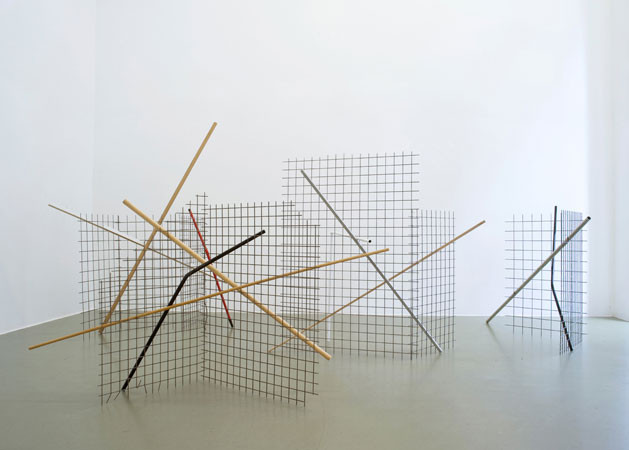 Two parts are always in different relations to one another. They can be the same, like twins, oppose each other, like a mirror reflection, negate or augment one another, like beginning and end, or simply carry on. In Sunah Choi’s second exhibition the artist continues her reflection on the ideal, concept and reality, using the examples of modernity and everyday life, in initially seemingly simple compositions that create precarious balances and suggest through subtle metaphors the spaces of possibility.

Like in the short column made of concrete blocks – Güsse (casts), 2014. The title already makes it clear that this tower is not made out of identical stacked elements such as bricks or blocks, but rather it consists of concrete elements poured on top of each other. This is reminiscent of the process that is used in the construction of skyscrapers, in which the construction platform as cladding grows with the building and climbs upwards, while floor upon floor is completed as if on a vertically arranged conveyor belt. However, the work does not exude any homogenous, hermetic closedness, because embedded between the individual concrete layers are sheets of glass, steel and aluminum of various thicknesses – all materials that are found in architectural design. Only one thin red plastic bag is out of line, whose edge peeps out from between the concrete elements as if it had been forgotten to be removed or as if in modern architecture the aspect of ubiquitous trash as a sign of neglect should also always be included. The bag’s color and material lend the serial, heavy and rigid structure in its lightness, plasticity and fragility an unexpected moment of theatricality and a touch of absentmindedness. These types of details used as light-footed appliqués not only create confusion in the artist’s works, but also point repeatedly to alternative narratives beyond references to modernity, its art and architecture.

Also in the two works Gitterwerk (lattice work) I, II, 2014 – each consisting of a metal frame, in which single metal rods are embedded, so that it results in a loose mesh – single colorful shreds of paper are tucked in between, as if by accident in an everyday act and not necessarily mischievous vandalism, which could depict the rest of a ripped up announcement, a poster or a flyer. Which raises the question, where could the obviously fictitious misuse of the work begin or end, and when does the work become a picture, even a reductionist painting? Neither the strands nor the entire grid of bars is really rigid; it seems almost weak. One could think this might be intended to fend off or cushion, and is vaguely reminiscent of the old metal frames for spring beds as they turn up now and then in the bulk waste, or of construction site fencing, which the artist used for earlier, comparable works. But the artist meticulously planned the construction of the metal frames as a precisely balanced play on everyday expectations of form and material, and as a challenge to the viewing gaze. This goes to the last detail: the individual strands can be moved mechanically, they partially sag, some are doubled, and stand for the flexibility of the work, its inherit narrative and use of metaphors.

In the sculpture series von allein (on it ́s own) I-IV, 2014, this process continues. Overall the impression of a room installation emerges as if the views that result from looking into the container (in which, in the first part of the exhibition, different poles stuck in a pedestal mirrored from within created a kaleidoscope-like optical illusion upon looking inside) unfold in the space. Welded metal grids, such as ones used for the production of fences or garden gates, serve as a framework. Placed nearly at a right angle against each other, the grids become entangled in one another and keep standing, defying gravity “by themselves”, supported or disturbed by straight and bent poles and moldings made of wood and metal, slotted in diagonally in between them. At times these interfering elements show slight signs of use and at second glance can be recognized as quite banal everyday objects; among them is a bent broomstick made out of a painted, thin sheet metal pipe. The staging is as formally clear as it is puzzling: a long square timber is painted white on one side and an aluminum molding exhibits a subtle bend so that it blends exactly into the openings of the grid. It comes across as so accurate as if the geometric lines, curves and graphs were taken from the math notebook of a schoolboy and were translated into the third dimension by the simplest means. Also the individual compositions, like the one from the ensemble, are precisely balanced, from the exactly cut out, asymmetrical forms of the grid to the moiré effects that occur when one walks around it and thereby captures the ostensible rawness of the materials, but also the fragility of its construction and the poetically explosive power of its composition. The grids do not only exhibit materials of modern everyday architecture, but also depict, even if formally abstracted, recognizable architectural constructions, which are pierced by the rods. Almost like laser beams that cut through concrete architecture in current science fiction blockbuster films as if it was made of cheese, and therefore lend a destructive and wonderful expression to a societal need for escapism from a restrictive daily routine.

This everyday life is characterized by the fact that the laser cannons are only used in fiction and stones usually lay on the ground, in pavement or on the sidewalk. Sunah Choi achieves a small, transparent wonder in three works, whose titles carry the geological terms of their alleged material, with cobblestones hanging on the wall through magnetic force, separated by strips of steel. Because, in fact, the artist chooses the titles of the works according to outward similarities of the cobblestones she found to images in a mineralogy book. That porphyry, like it appears at least by name in Porphyr Phonolith, 2014, is in fact a common stone for the production of cobblestones, is a complete coincidence. In the work Syenit Trachit, 2014, two stones do not wedge in steel, but rather a black and white print of an advertising photo for an elegant luxury watch and pin it to the wall. As a status symbol, as well as a delicate mechanical system and cultural product, it would survive the encounter with the stones unscathed. But that is not the primary point; rather it is about the transition from similarity and identity as well as the relationship and fluent passage between culture and nature. It is likewise about mustering the power to allow the notion that cobblestones would actually overcome gravity.