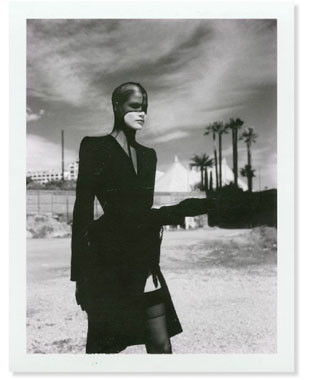 polaroid technology revolutionized photography. those who have used a polaroid camera can hardly forget the unique odor of its developing emulsion and the thrill of the instant image. with the polaroid, every image is one of a kind. this also applies to the later large-format polacolor prints, whose developing process left behind characteristic borders. polaroids have thus been frequently used for preliminary studies as well as a standalone medium. this was already the case early on, following the creation and presentation of the instant photograph at the optical society of america in 1947 by its inventor, edwin land – and especially after he presented in 1972 the legendary sx-70 system, a collapsible, simple and affordable camera. in nearly all photographic areas – from landscape and genre, portrait and self-portrait, fashion and nudes – this unique imaging process has found enthusiastic devotees all over the world.

helmut newton used the technology intensively starting in the 1970s, especially for his fashion photo shoots. as he once described in an interview, this satisfied his impatient urge to want to know immediately how a certain situation would look as a photograph. in this context, the polaroid acted as an idea sketch in addition to testing the actual lighting situation and image composition. in 1992 newton published pola woman, an unconventional book consisting only of his polaroids. according to the photographer, the publication lay particularly close to his heart, although it was discussed amidst great controversy. in response to the accusation that the images in the book were not perfect enough, he countered: “but that was exactly what was exciting – the spontaneity, the speed.”

newton’s additional notes, written on the edges of the polaroids, are fascinating as well as revealing with regard to the model, client or location and date. the comments, the haziness of the images and the signs of use are naturally also to be found on the enlargements of the polaroids included in the exhibition; they testify to a pragmatic approach to the original work materials, which have now possess an own inherent value. especially interesting for today’s viewer is the unique polaroid aesthetic that unexpectedly alters the colors and contrast of the photographed subject.

for the first time ever, over 300 works based on the original polaroids offer a comprehensive overview of this aspect of newton’s oeuvre. the exhibition is thus a look into the sketchbook of one of the most influential photographers of the 20th century. many of the iconic photographs that have already been presented in the exhibition space of the helmut newton foundation can be discovered in the current exhibition in the process of their creation.
www.helmutnewton.com