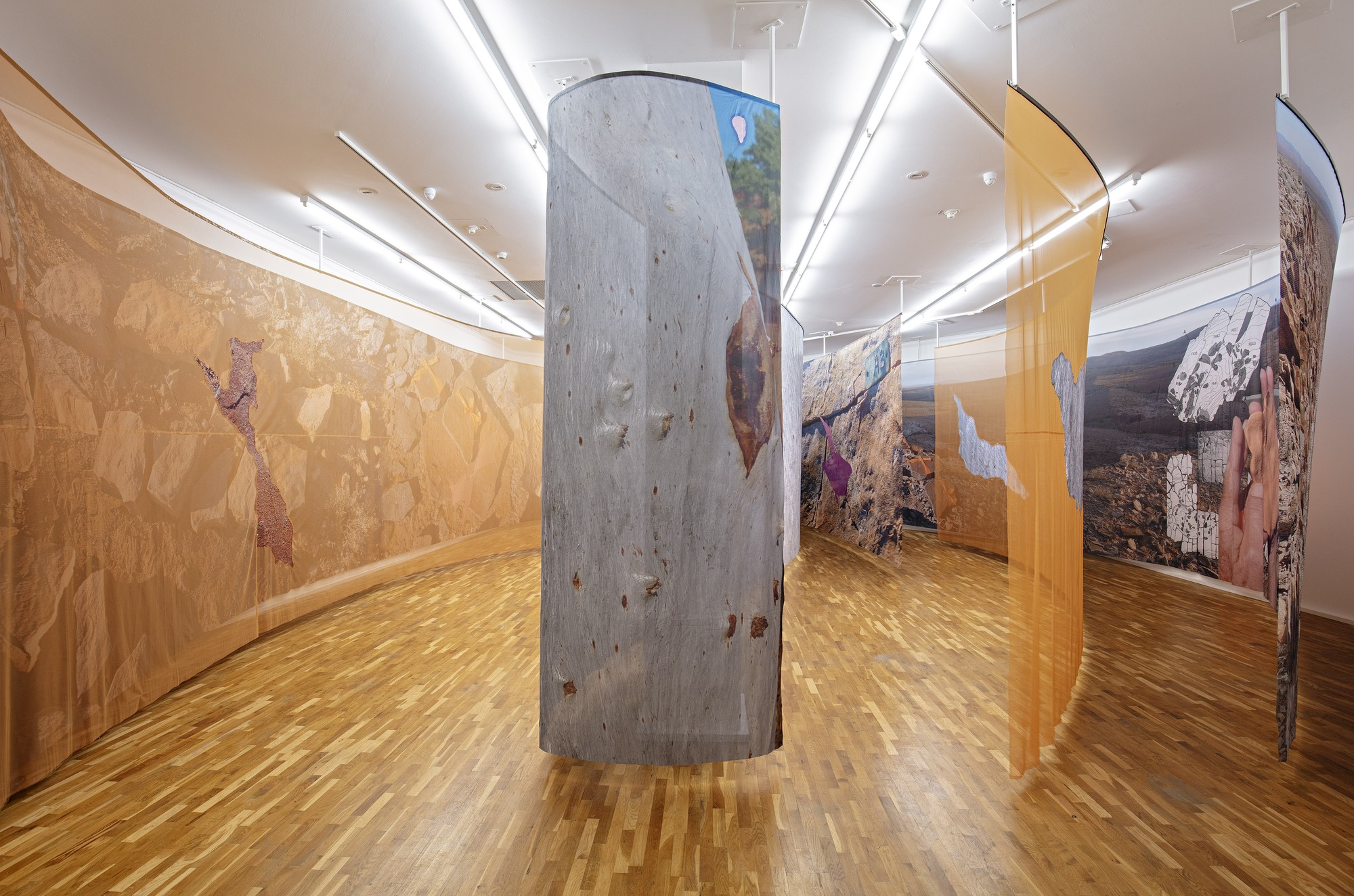 Mariana Castillo Deball, Once I thought the world was somewhere else, 2021, Exhibition view, MGKSiegen, Courtesy the artist, Photo: Philipp Ottendörfer 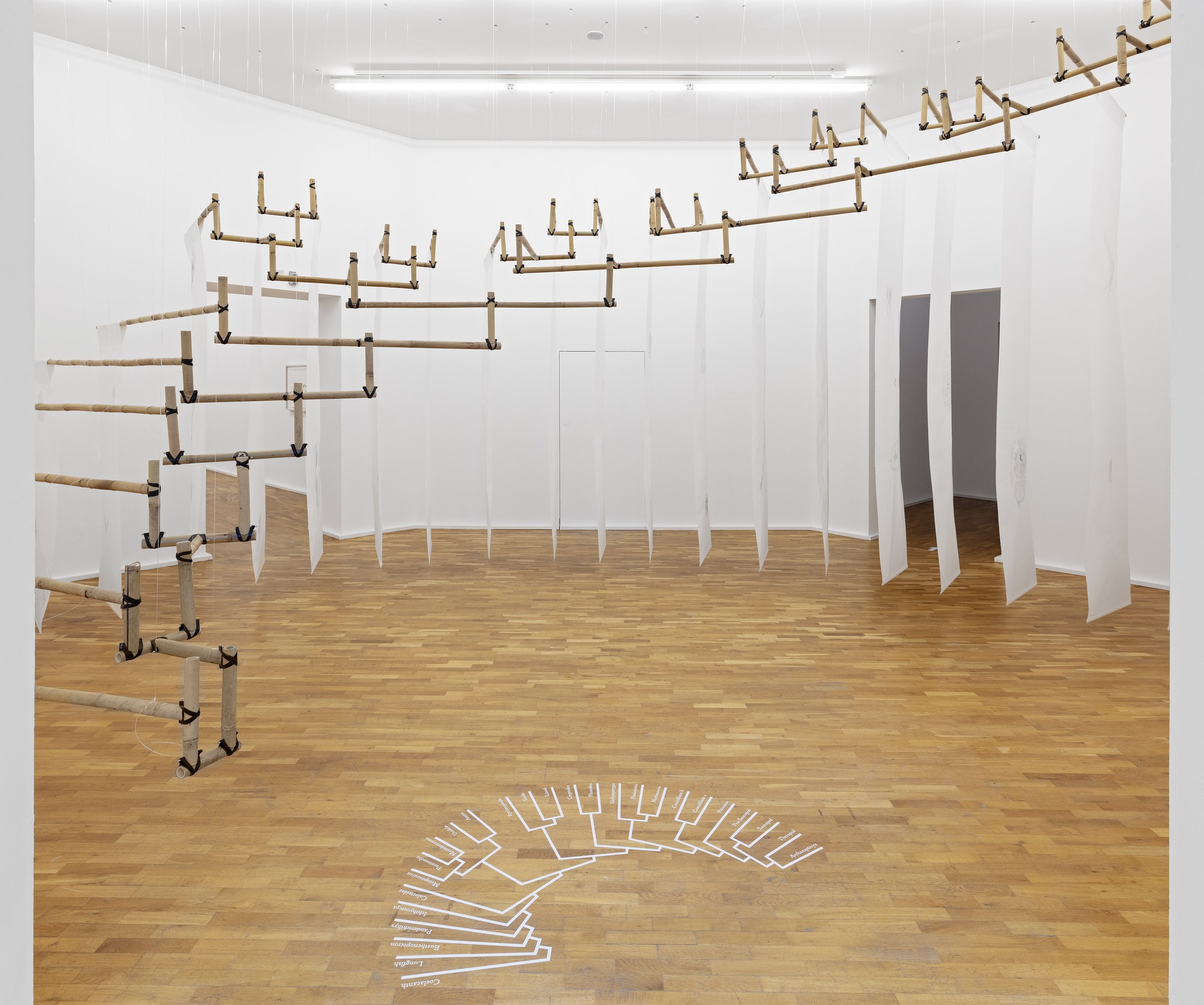 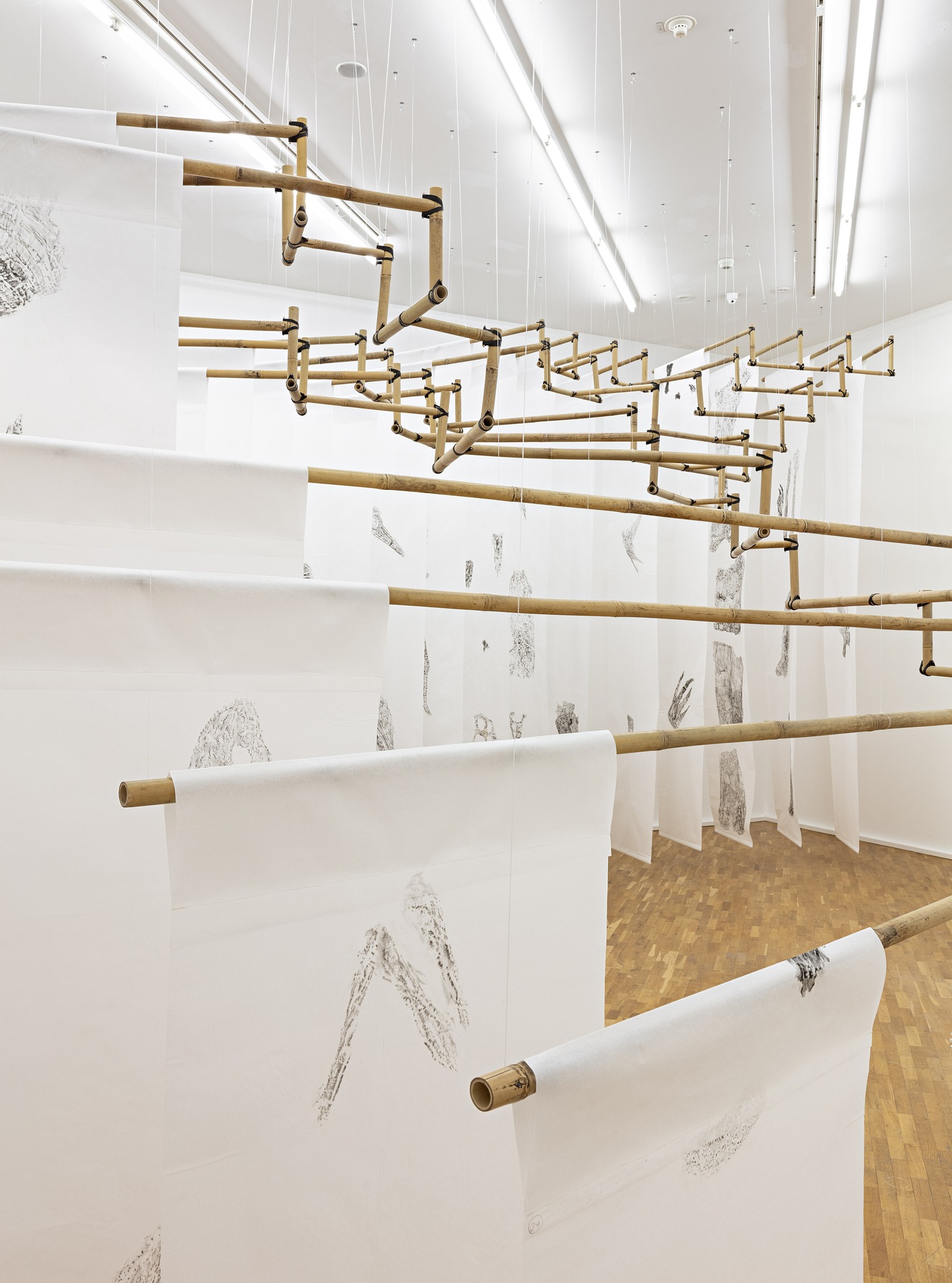 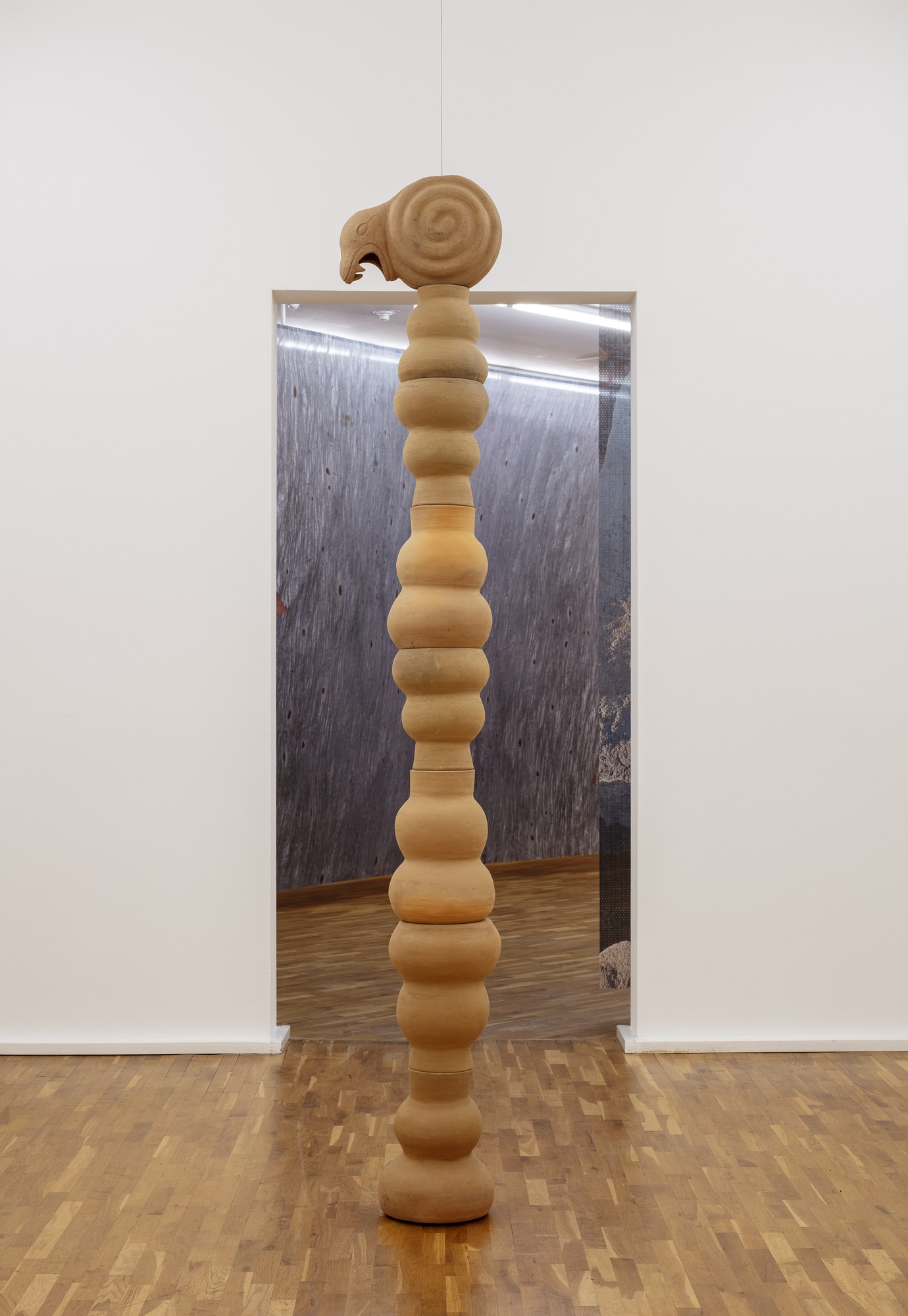 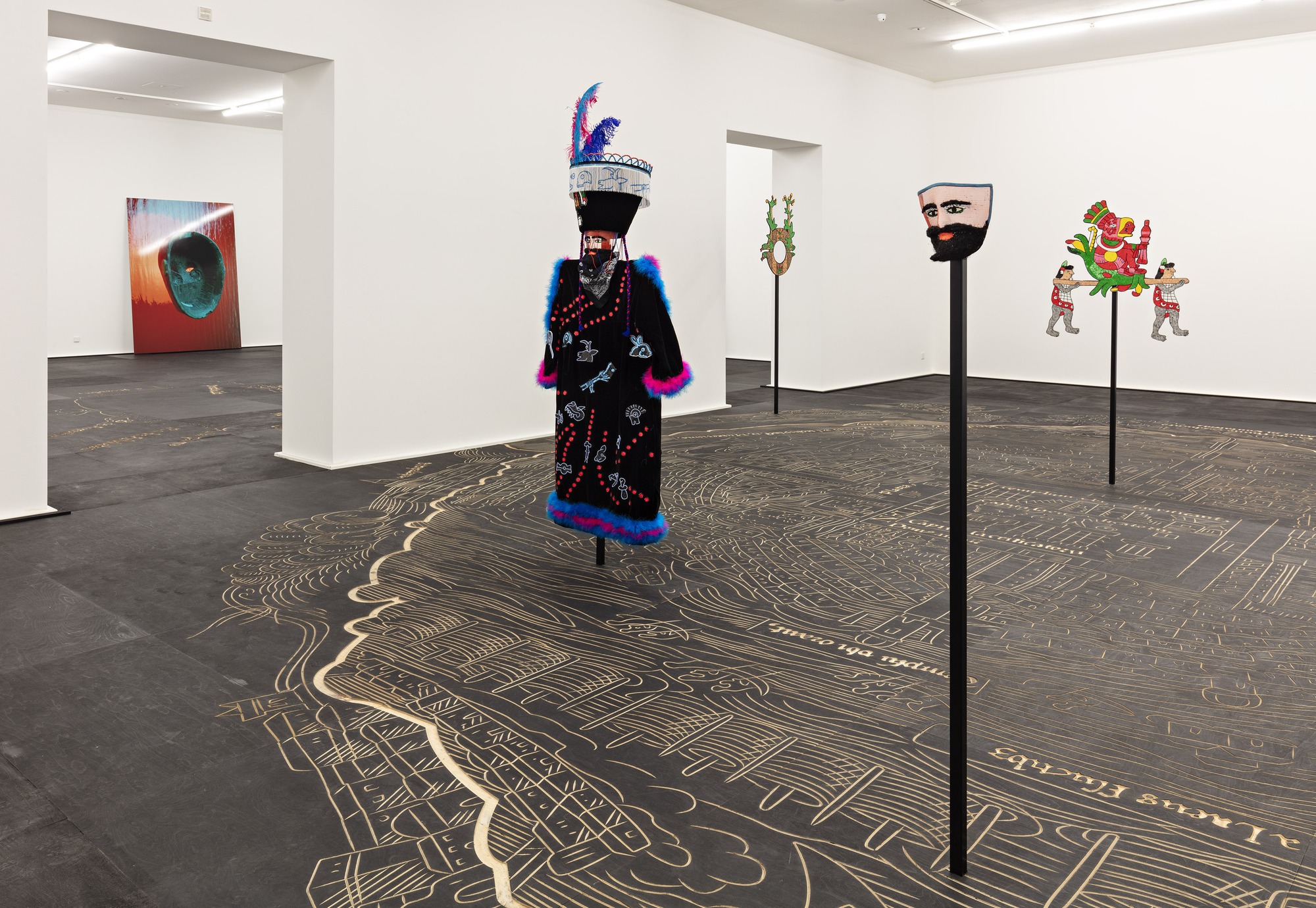 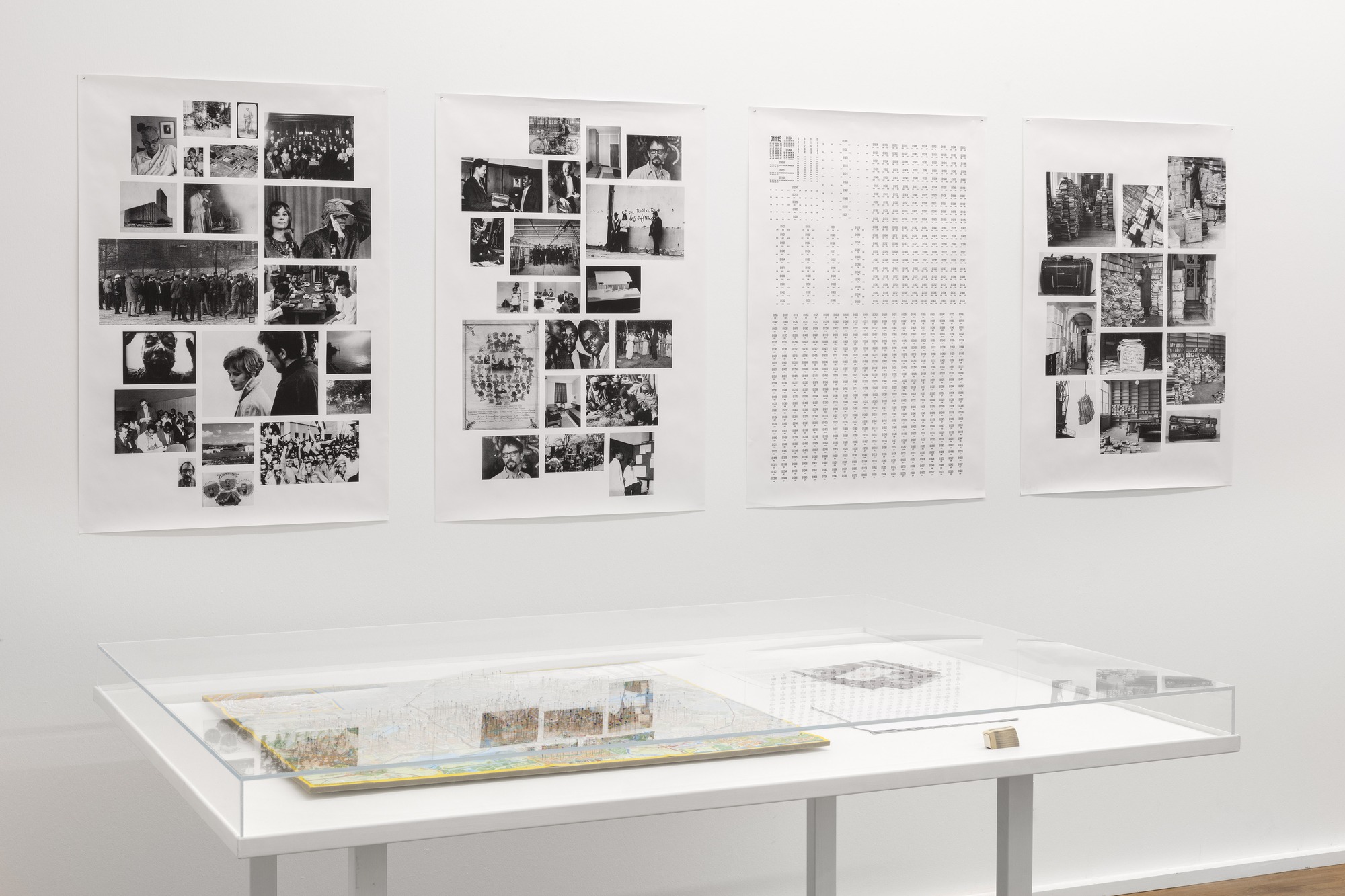 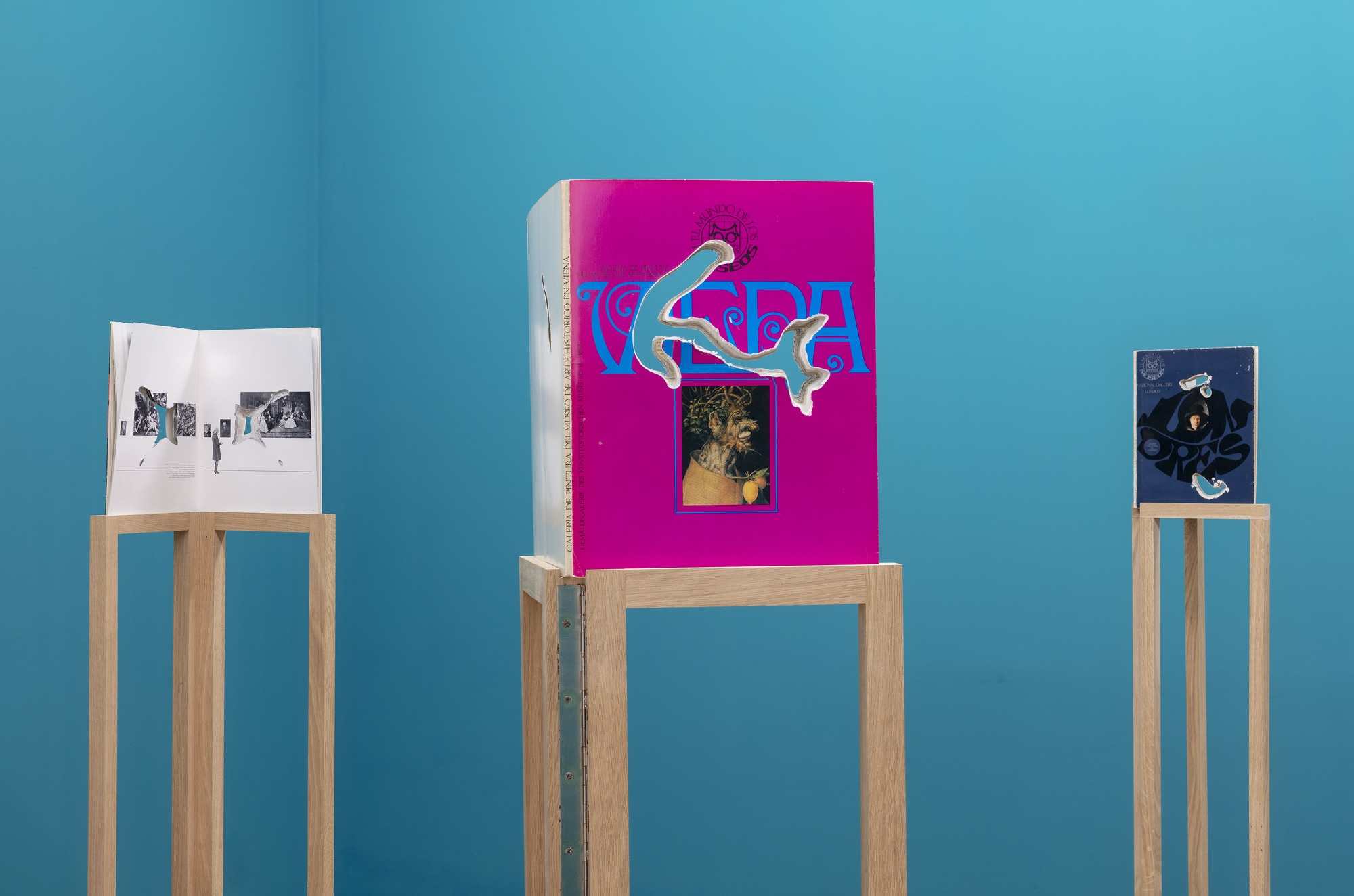 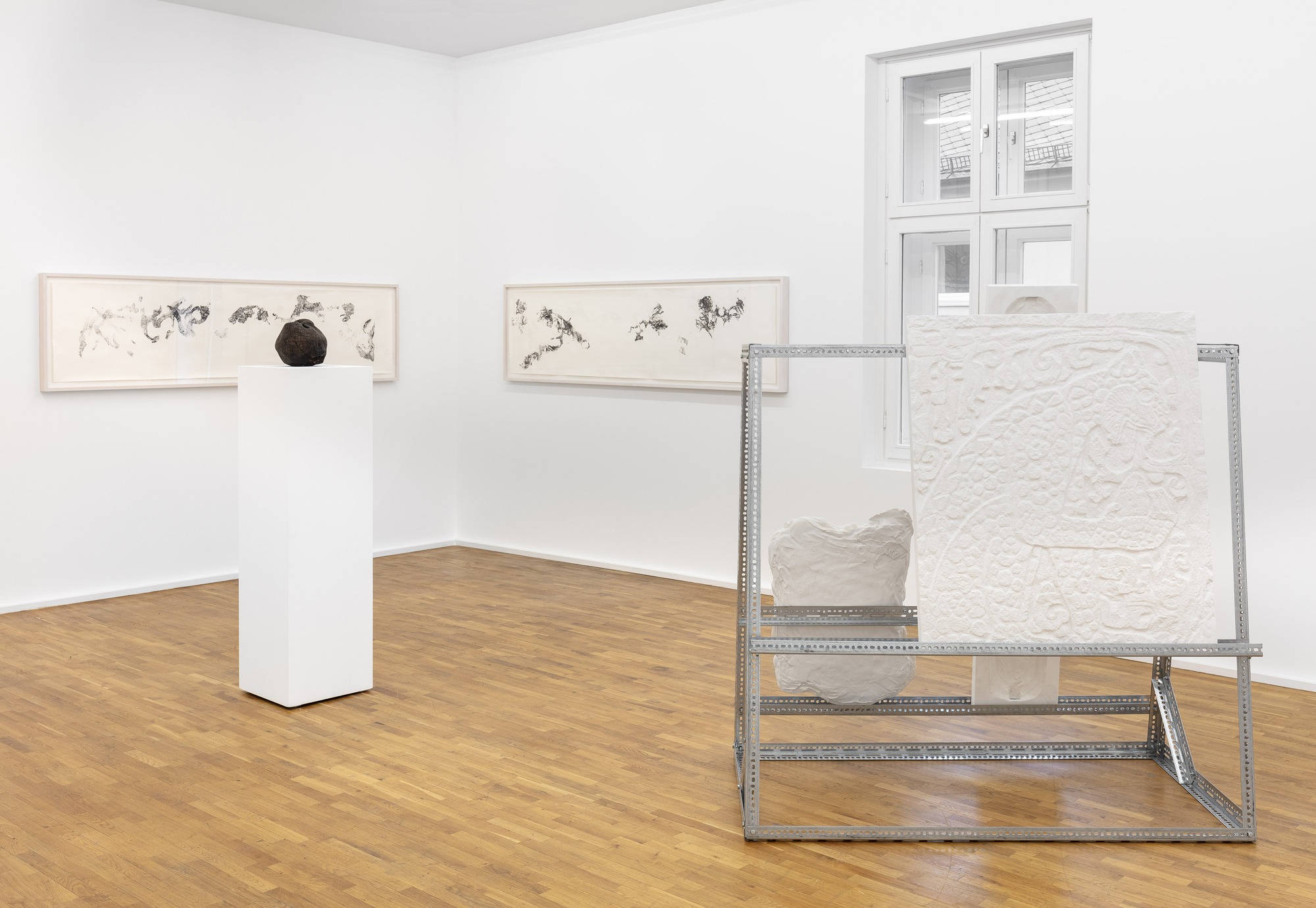 Mariana Castillo Deball, Imprint Zoomorph P, 2013, Zoomorph P, 2013, Jaguar Storage, 2014, Exhibition view, MGKSiegen, Courtesy the artist, Photo: Philipp Ottendörfer
The museum as such fascinates Mariana Castillo Deball (* 1975, Mexico City, Mexico) as a place where we encounter strange and sometimes disturbing objects. In her artistic work, Castillo Deball follows their stories in order to gain a new perspective on and a deeper understanding of cultural, temporal and spatial contexts. She also questions the museum narrative that overlies the objects. To this end, she researches in libraries and archives, seeks cooperation with scientists, and uses the methods of archaeology, ethnography and historical research. In large-scale installations, sculptures, videos, photographs, prints and (artist) publications, the artist translates her findings into her own personal artistic language. With a view to the present day, she visualizes decisive moments in cultural history and enables us to experience our alienation from the things she has been examining.

The title of her exhibition “Amarantus” refers to the plant amaranth, sometimes known as foxtail, which is commonly found all over the world. Amaranth seeds are one of the most important foodstuffs in Mexico and have long been used in religious rituals, which is why it was banned temporarily during the Spanish colonization of the Americas. The Greek meaning of the word conveys the idea of a flower that never wilts. It is in a similar way that Mariana Castillo Deball understands the objects she is following. Even out of their original context they resemble flowers that never die. In this way the artist imagines a museum that permits different readings of cultural knowledge and reveals fresh connecting threads between objects.
The exhibition at MGKSiegen is the first solo presentation in Germany covering the Mexican artist’s complete œuvre. Works from the last 15 years are being presented in 14 rooms. Among them are many current installations newly adapted and produced for the Siegen exhibition.

The “Nuremberg Map of Tenochtitlan” (2013) consists of a large area of pavement made from wooden boards into which the first European map of the Aztec capital Tenochtitlan is engraved. The original map was created 500 years ago in the course of the region's conquest. It was first sent in a letter from Hernán Cortés to the Spanish King Charles V in 1521 and later distributed worldwide as a woodcut. This representation of Tenochtitlan was used to justify the expense of Spain's colonial efforts. The publication of the map in Nuremberg in 1524, along with a translation of the letter into Latin, fired imaginations and triggered support from a wider European public as well. It was the first, and the best-known image of Tenochtitlan available to Europeans at the time.

Two other works relating to the artist's current interest in evolution have also been adapted for the MGKSiegen. “Pleasures of Association, and Poissons, such as Love–” (2017) is a spiral-shaped installation illustrating the evolution of vertebrates–from fish to birds–that occurred over a period of 200 million years. The spiral bamboo structure presents ink rubbings of fossil specimens on paper made at the Museum of Natural History in Berlin. “Once I thought the world was somewhere else” (2021) is another installation which meanders through the gallery space, exploring the Ediacaran fossils of South Australia via multi-layered, immersive textile diorama assembled from colour photographs.

Besides these installations, there are also works revealing a direct reference to the exhibition venue in Siegen. The artist looks at the “Silberne Taufschale zu Siegen” (Silver Baptismal Bowl of Siegen), which Prince Johann Moritz of Nassau-Siegen brought to Siegen as a gift for the local church, the Nikolaikirche. The object is linked to 17th-century colonial trade history: it was made in Peru around 1586, later came to Africa and Brazil in the context of diplomatic-economic exchange and the slave trade, and finally arrived in Siegen in 1658. The bowl is currently one of the key pieces in an exhibition on slavery at the Rijksmuseum in Amsterdam. Because of its significance and this loan, the parish has made a digital copy and is producing a replica in the meantime. Against this background, Mariana Castillo Deball will develop a new work dealing with this context and the concept of reproduction.

The works on show also include a loan from the Siegerland Museum, the etching “Battle of the Amazons” (1623) by Lucas Vorsterman I after Peter Paul Rubens. It is based on an original painting of the same name by Rubens, who operated a printing workshop in his studio: here, reproductions of his works were made for sale to a wider public and for publication in books. Castillo Deball is interested in this distinction between the uniqueness of the original and its reproduction as a more democratic way of distributing artworks. Incorporating other exhibits, a tour of the exhibition space thus unfolds as a carefully considered and impressive narrative, guiding us through Castillo Deball’s works.

Mariana Castillo Deball has been awarded internationally renowned prizes, including the Prize of the National Gallery, Berlin (2013), the Zurich Art Prize (2012) and the Ars Viva Award (2009). She has participated in numerous major exhibitions and biennials, including the Sharjah Biennial (2017), Berlin Biennale (2014), dOCUMENTA (13), Kassel (2012) or the Venice Biennale (2011). The artist's most recent solo exhibitions include Modern Art Oxford, England (2020), Museum Monash University Museum of Art, Melbourne and New Museum, New York City (both 2019). Furthermore, at the San Francisco Art Institute (2016), at Hamburger Bahnhof – Museum für Gegenwart, Berlin (2014), the CCA: Centre for Contemporary Arts, Glasgow, Scotland and the Chisenhale Gallery, London (2013). She has been teaching as a professor of sculpture at Münster Academy of Art since 2015.

An accompanying booklet as well as a new issue of Ixiptla will be published parallel to the exhibition.This artistic-scientific journal has been published by Castillo Deball in partnership with various institutions since 2013 and explores individual aspects of her artistic research in greater depth.

“Amarantus” at MGKSiegen is curated by Thomas Thiel and being produced in collaboration with the MUAC – Museo Universitario Arte Contemporáneo, Mexico and the Artium – Centro-Museo Vasco de Arte Contemporáneo de Vitoria-Gasteiz, Spain, where it will be shown and curated by Catalina Lozano subsequently.
www.mgksiegen.de