The Multiplication Of Humor 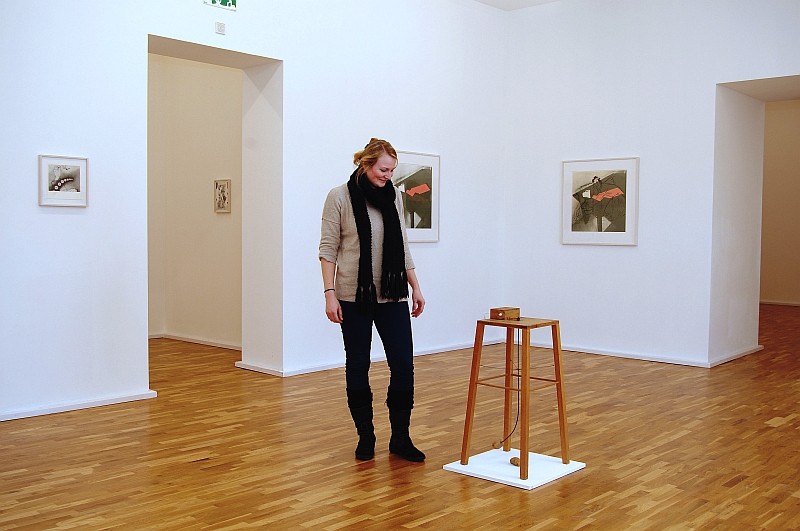 Exhibition view "Sigmar Polke. The Multiplication of Humor". „Apparat, mit dem eine Kartoffel eine andere umkreisen kann (Apparatus whereby one potato can orbit another)“, 1969 © The Estate of Sigmar Polke/VG Bild-Kunst, Bonn. Photo Thomas Kellner
From March 17 to June 30, 2013, the Museum für Gegenwartskunst Siegen will be showing the private Ciesielski Collection, which includes a full set of Polke’s editions, in an exhibition entitled “The Multiplication of Humor”.

The first graphic piece was produced in 1963, establishing Sigmar Polke’s work group of editions. It was a square invitation card with a magazine cut-out stuck onto it, produced for the “Demonstrative Exhibition” that Polke showed together with Gerhard Richter, Konrad Lueg and Manfred Kuttner in Kaiserstrasse, Düsseldorf. Between this first multiple from his student days – circulation unknown – and the four large-format prints “Danneckers Hausgecko. Die Zwei Frauen” (Dannecker’s Pet Gecko. The Two Women) from 2009, Sigmar Polke’s extremely multifaceted, humorous, ironically ambiguous and always very serious creative oeuvre emerged, with a total of circa 200 works.

The surprising themes and experimental techniques with which Polke embarked on completely new paths in art can be found on sheets, in folders, books, photographs or objects. The field of editions is sourced in and leads back to the artist’s painting, but it has also developed media aspects entirely its own.

Early raster prints with and without decorative elements encounter absurd apparatus and objects as media-critical metaphors. Coloured, serial prints with everyday motifs appear as German-Pop in the vicinity of reportage-like, socially critical photos or mixed-media images produced on furnishing fabrics. Media and cultural history is reflected in the multiples based on adaptation of historical engravings into optical apparatus and magical procedures. Not only full of references but equally diverse technically, Polke ensnares the viewer by laying subtle traps in his works, so lending substance to his reputation as one of the most important artists of our times.

In 2007 Sigmar Polke received the 11th Rubens Prize from the City of Siegen. In traditional fashion, this award ceremony was accompanied by a major exhibition in the Museum für Gegenwartskunst. Remaining in contact with the artist, who died in 2010, the museum was able to acquire some fine works for its collection of Rubens Prize Winners. The twenty works by Polke from the Lambrecht-Schadeberg Collection currently lodged in the museum provide the point of reference for our presentation of the editions as a work group.

The exhibition will be shown subsequently in the museum les Abbatoirs, Toulouse.
www.mgksiegen.de