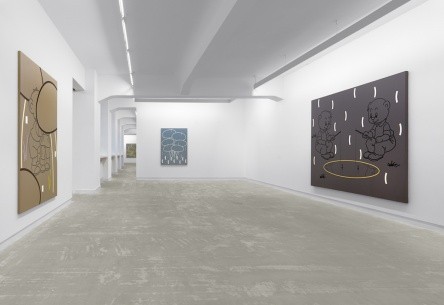 The new pictures exhibited by Gerard Hemsworth at the Michael Janssen Gallery resemble oversized scenes from a comic book. This genre has its own definite, distinctive language of signs. The painted objects are minimalist in their conception. Clouds, mushrooms, grass and the figures themselves emerge via just a few brushstrokes. The art of comic sketching, also known simply as Comic, has not enjoyed great prominence in museums until now. Painters only found recognition when they challenged convention and transferred this form of expression onto their canvases. The relationship between the representatives of Pop Art, such as Roy Lichtenstein, and Gerard Hemsworth is unmistakable.

The protagonists of the picture Now Then are two little pigs, which are both clinging to parts of a tattered teddy bear, weeping as they do so. The scene elicits sympathy for the childlike motif. Despite the putatively simple interpretation, the impression that there is perhaps more to the image than meets the eye persists. This is a common element of Hemsworth’s pictures. A certain unease is generated by the invisible, leaving the observer with a sense of an unspoken threat.

For example, the work entitled Can you keep a secret shows a childlike figure hidden beneath an enormous mushroom, looking at its reflection in a hand mirror and sheltering from the rain, which is suggested by the white vertical lines. Although observers may strive to share in the secret referred to in the work’s title, they are disappointed. The picture is dominated by an indefinable metallic grey, which leads us to suspect that we may be dealing with a bleak truth which can, at most, be entrusted to one’s own reflection.

Hemsworth prepares his canvases by dying them in meticulously selected shades. In a subsequent step, he uses adhesive tape to attach stencils to the surface of the image. When the tape is removed, the linear contours which are characteristic of his works emerge. This method, combined with his perfectionism, lend the works something serial and yet abstract, which can be seen in pictures such as Frightened Rabbit. Lines merge to form patterns and symbols, such as blades of grass, and are repeated at regular intervals. Here, the motif is merely suggested; several interpretations are possible.

Gerard Hemsworth (*1945 in London) holds the posts of Professor of Fine Art and Director of Postgraduate Studies at Goldsmiths College in London. His pictures have been exhibited at international galleries and institutions, including the Institute of Contemporary Arts and the Tate Gallery in London since the beginning of his career in the mid-1960s. We look forward to presenting the first solo exhibition of Gerard Hemsworth’s works at the Michael Janssen Gallery in Berlin in January 2009.
www.galeriemichaeljanssen.de