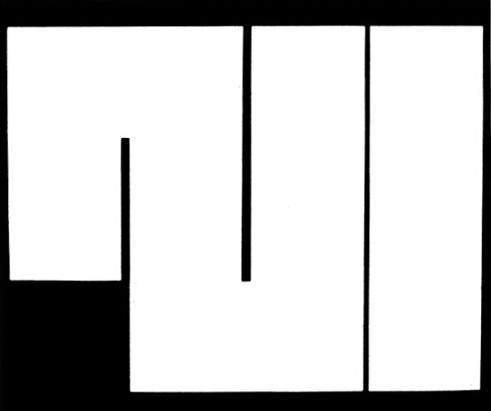 Julije Knifer, Untitled, 1988, oil on canvas, 200 x 160 cm
Michael Janssen is pleased to present two outstanding representatives of Eastern European conceptual art: Julije Knifer (1924-2004) and Mladen Stilinovic (born in 1947). Even though they belong to different generations, they share not just their Croatian roots, but more importantly, a notion of art that relies on a reduced visual vocabulary, repetition, and a confrontation with the absurd.

While Julije Knifer’s first important exhibition in the United States took place only in 2014, where it met with a lot of interest, in Europe – and especially in French-speaking countries, because he lived in Paris before his death for a while – experts in the field have long regarded him as a pioneer in the development of western conceptual art. Knifer was a member of the avant-garde group Gorgona, based in Zagreb, who engaged with neo-Dada tendencies, taking an explicitly intellectual approach and basing their works on a new, ephemerous notion of art.

In his search for a kind of anti-painting, Knifer eschewed the use of colour, creating what he considered the strongest visual contrasts with black and white. Like his own form of yin and yang, his variations of meander, which basically make up his oeuvre, submit to a superordinate harmony. Following his role model in the field of Musik, Igor Stravisnky, Knifer wished to provoke through the technique of repetition an “escalation of uniformity and monotony.” Not unlike On Kawara, in this way he documented the passing of time, and at the same time the absurdity of this endeavour. Since antiquity, the meander has been a symbol for eternity and the eternally self-renewing energy of the universe. This principle goes hand in hand with Knifer’s lack of interest in a quantitative of qualitative development of his oeuvre, which meant that he frequently and enthusiastically returned to older works and revised them.

In addition to Knifer, Michael Janssen is showing exemplary works by Mladen Stilinovic, who is similarly influenced by Russian suprematists and constructivists like Kazimir Malevich. His experiments in film and painting are louder and more ostentatious than the rather quieter, more suggestive art of Knifer. He works with irony in combination with an alienation of what at first sight may seem inconspicuous motifs, such as the pages of a dictionary, which he whitened for his Dictionary Pain, presented in 2003 at the 50th Venice Biennale, leaving only the words to be defined, to which he added the universal explanation “pain”.

Mladen Stilinovic (born in Belgrad in 1947) was a founding member of sestorice autora (six authors) and remained a member of the group until its dissolution around 1979. From 1969-1976 he did experimental film work, and in 1978 he co-founded the Podroom Gallery. From 1981-1991 he was director of the Extended Media Gallery. His works have been exhibited in numerous solo and group shows, especially around Europe, at institutions like e-flux, New York (2014), gp agency, Paris (2012), Ludwig Museum, Budapest (2011), Index, Stockholm (2009), Galerie im Taxispalais, Innsbruck (2008), Center for Contemporary Art, Glasgow (2008).