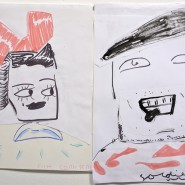 On Friday, April 26, Galerie Michael Janssen will be presenting its second exhibition by English artist Rose Wylie (b. 1934) entitled Works on paper parallel to her first major solo museum exhibition at Tate Britain. On view is a selection of her drawings, collages and watercolours from the last ten years.

Wylie uses moments from films, memories and dreams to create metaphysical meditations on her own experience of the world. Her art is surprisingly accessible and immediate; she purposely chooses subjects that are shared and often combines seemingly naïve figuration with a lyrical sense of composition. Despite its childlike sensibility, it has a contextual depth that comes from experience. She first studied art as a young woman, but only began to seriously paint at the age of 47, after her children had grown and she had gone back to art school, graduating from the Royal College of Art in 1981.

Although Wylie‘s work might at first glance be categorized as Outside Art, it is full of sophisticated cultural and art-historical references - such as the films of Quentin Tarantino and Albrecht Dürer‘s woodcuts - and evokes the work of Jean-Michel Basquiat and Philip Guston.

The starting point for her paintings is her recollection of things. Her memories, rather than the images themselves become the model for her work. The mnemonic process is for her a useful way to filter essential characteristics and to avoid too literal a translation.
She usually begins with a drawing, which she then works and reworks, cutting, collaging, slicing and dicing it until she gets something that she is satisfied with. She then uses the drawing as the basis for a painting. Despite their delicacy, she paints large-scale canvases - often combining several panels to create a whole.

Wylie‘s work has garnered praise from critics such as Roberta Smith in the New York Times and Germaine Greer in The Guardian. She participated in the 2010 Women to Watch exhibition at the National Museum of Women in the Arts, and was chosen by fashion designers Savannah and Sienna Miller as a guest artist for a fall/winter collection.

In May 2013 Tate Britain will present a solo exhibition of her most recent works.
michaeljanssen.gallery/