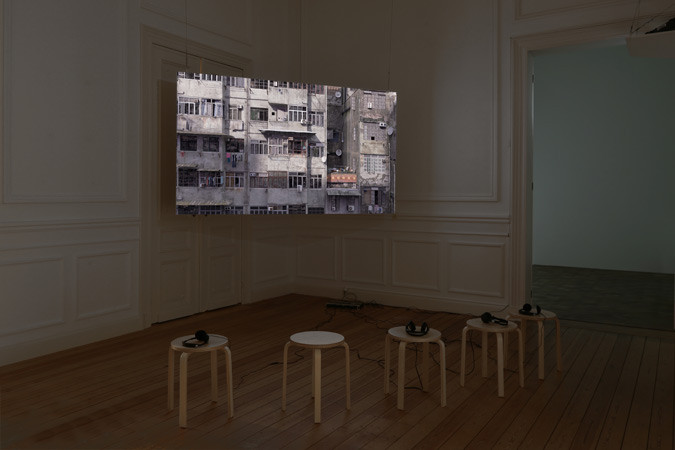 Radio Piece (Hong Kong) is an audiovisual installation that position the viewer on the intersection of mental and physical space. It mainly uses images from Hong Kong’s notorious Kowloon Walled City. In the ’90, the city contained a demography, almost inhumane, of more than 30,000 within its 3 hectares. It now has been taken down. The work depicts itself as an uninterrupted backtracking camera, smoothly moving from one type of space to another. Its primary angle focuses on the image of a zen garden, slowly opening into a cramped room to finally expand into the view of the Walled City of Kowloon. On the other hand, the sound conveys the experience of those same spaces as an inner experiment, inside the head of the listener, or to be more precise : inside the headphones. The sound of Radio Piece (Hong Kong) in fact uses binaural recording, a method of recording that uses two microphones, arranged with the intent to create a three dimensional acoustic experience for the listener. It results as an uncanny presence of fictional noises of people and events taking place inside the room. In Radio Piece (Hong Kong), all seems directed to appear like a rhythmical sounds sequence which is growing in an uninterrupted and sovereign space. But in reality, space, living-conditions, mental space and virtual space have been mixed up to cast doubt onto the coherence of perception, a critical point of view of mind colonisation as real estate. Mental space has today become the new real estate. And literally considered, a mental space might be the space running from ear to ear, where the sense of hearing can be understood as a dividing wall. Also, we might now be expecting for the emergence of a market of mental real estate that develops spaces between the ears. A profitable market which offers unlimited possibilities of expansion.
www.gms.be