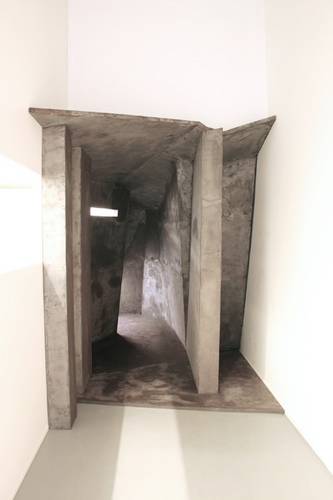 The work of Tobias Rehberger (°1966, Esslingen) holds middle between art, design, publicity, fashion and architecture and often manifests itself as installations in a (public) space, which influence our experience of the space and stress the interaction between people.
In the front part of the gallery Tobias Rehberger builds a bunker, based on the bunker he owns with Olafur Eliasson in Berlin. The bunker is not an exact reproduction of the original space in Berlin but a re-interpretation, based on the principles of stealth design, which is normally applied to keep airplanes and ships out of radars' reach.
Visitors who enter the gallery automatically find themselves inside the bunker. In order to enter the rest of the gallery space, they have to leave the bunker through the emergency exit. Metaphorically speaking, the front part of the gallery and the whole world are inside the bunker and only the rear part of the gallery is actually outside of it.